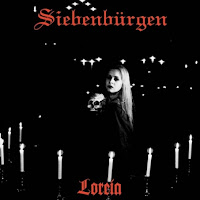 Thanks to Vampire the Masquerade, an evergrowing legion of Anne Rice fans and the propagation of the Paranormal Romance section at your local brick & mortar booksellers, the 90s were a fertile era for the wampyric subcultures. Because of the shared precepts, there was little doubt this would also carry over to the metal arena due to the obvious parallels you'd find among the Goths and heshers who fraternized and possibly even bumped their uglies behind seedy Barnes & Nobles franchises and on their parents' sofas during reruns of The Craft. Cradle of Filth was the most obvious musical outfit to cultivate the imagery, sexual fetishes and lyrical aesthetics pertaining to this theme, but among the Norse scene there were also bands as ranged as Darkthrone and Ancient who also tried to put their own stamp on the vampire myths, with mixed commitment and even more mixed results.

Siebenbürgen, named for the German of Transylvania itself, was another Scandinavian group whose earlier buzz seemed to revolve specifically around this niche, and like their far more popular British counterparts, a weaving of Gothic rock elements and melodic black metal that offer some measured of 'refinement' over that genre's crude roots. Reviled by some purists, but approachable for those who might have arrived at black metal directly through Cradle or the Romantic elegance that stood in stark opposition to the barbaric hordes who populated its underground. Granted, these Swedes skewed much further towards the 'black' than the Gothic in how they structured the material for their Napalm Records debut. Melodic tremolo picked guitar lines dominate Loreia, both against the slower rock beats and the moderately blasted, thundering drums, and these are rarely interrupted save for the more majestic chord patterns that are occasionally left to stand on their own. The band wasn't as savage as a Marduk, or as meticulous as an Emperor, but had more in common with middle run bands like Finland's Catamenia whose riffing patterns were quite similar via the reliance on overt melodic composition rather than intensity or, I dare say it, evil.

In fact, the only areas in which this debut might distinguish itself from the throngs of its corpse-painted peers is in the use of Lovisa Hallstedt's wailing, over the top vocals and violin sequences, neither of which were completely unique within this genre, but are mixed in so professionally well for this album that it seemed to stand head and...fangs...over a lot of the competition. As cheesy as Loreia can often feel with its constant attempts at emotionally wrenching the listener through its simple, predictable guitar lines, there's also something charming and appreciable about just how consistently it was assembled, without any particular region of the 51 minute play length feeling weaker than any other, even though there's an undercurrent of sameness running through it that betrays any notion of a pleasant, pleasurable surprise. There is no sudden, shadowy figure staring at you from your windowsill at night, entrancing you with its eyes before succumbing you to its horrible appetite...no, you're pretty much in Vampire Land™ from the very start, a fantasyscape of ivy strung Gothic castles, and lavish glades through which pale nymphs dance and bathe in the moonlight.

The mix is really well balanced, with the writhing, catchy tendrils of rhythm guitar given space to breathe over the tight-woven beatsand fat but obvious bass-lines. Marcus Ehlin's black metal rasp was hardly exemplary, assuming the position almost lethargically over the verse measures, but it does strike the right nerve once its being contrasted against Lovisa's shrill, almost ethereal presence, and by no means a bad performance on its own. The violin is sparse but sounds great where it appears, to the point that I wish they had included more of it, but where a lot of bands would dowse this sort of sound in loads of organs or other keyboard pads, Siebenbürgen keep it clean and powerful so you can ride the crisp propulsion of each rhythm like a bat carried along the prevailing wind pattern. I'd have liked to hear more varied songwriting, but I feel like a lot of bands of this ilk were trying to play it safe enough that they could establish themselves firmly within the genre's listener base and then execute their most insidious designs later on.

Whether or not this band ever accomplishes such an evolution is up for debate, but if you've got a soft spot (of neck flesh) for this mid-90s era of friendlier black metal, Loreia is an album which still holds a degree of nostalgic value, just not a lot of memorable songs. I myself would greatly prefer a record that can channel some of the dread, mystery and pathos of this theme which have always been my primary attractions to it, and Siebenbürgen came up a little short there. You won't shiver from any chill, in fact you'll feel almost like your sitting by a hearth with some red wine and a Gothic playmate while any storm or pitchfork-waving mob rages at a safe distance, appreciating but probably not understanding the lyrics; but that doesn't mean that this band eschewed an obvious effort to get this arranged and recorded, and so it remains a minor curiosity to sate fishnet-garbed connoisseurs of Laurel K. Hamilton, Sheridan le Fanu, and a long-locked Brad Pitt.