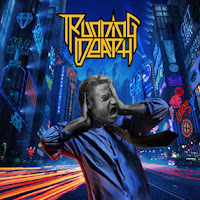 Unlike similarly named label mates Raging Death, the Germans Running Death have actually developed a slightly unique, punchy and compartmentalized modern thrash style which took me a little by surprise due to not only the compelling structure and variation found in many of their riffs themselves, but the clean, contemporary production through which they are all delivered. That's not to say that Overdrive has no precedent, that it's the most original approach to the medium I've experienced in modern times, or that it's the most memorable example of its class, but clearly some thought and organization went into this recording beyond just the typical 'we want to sound like band x plus band y that we found in our older brother's bedroom closet gathering dust back in 2005' derivation and aimlessness that so many of their peers suffer in the endless recycling pattern that has partly stunted this genre beyond its still standing luminaries and the few other pioneers left in its waters. Running Death might hang out just at the edge of the harbor, without going on a long cruise, but at least they're not beached whales, fattened so much off nostalgia that they can no longer sail or swim.

Some of the frilly licks and clinical harmonies assembled on the disc might contain small traces of DNA from Teutonic precursors like Mekong Delta, Destruction or even Deathrow, but I also found that this record had a lot in common with West Coast second tier thrashers of the 80s like Defiance, in particular that band's similarly clean and impactful sophomore Void Terra Firma. This is a little more forceful in execution, and the riffing slightly more varied, but the grainier, gut-fed vocals and several of the guitar progressions are cast of a similar mode, or perhaps to that of British hopefuls Xentrix on their own sophomore For Whose Advantage?, or a few lesser known German bands like Erosion or Accuser. Maybe Midas Touch's Presage of Disaster, only less bitter in disposition. But Running Death are arguably even more bizarre, for their proclivity to bust out into weird dissonant rock grooves in the middle of tunes like "Psycho". From the onset of any particular track on this album, there seemed very little precognition as to what exactly was going to happen throughout, and they tend to experiment a little more in the bridge sequences where they'll fly off the handle and experiment more with spurious tempo shifts, melodic harmonies and whatever their imaginations conjure forth. Not to say that it's always as unique as where that might lead them, but they do try.

The rhythm guitars have just the right amount of crunch to keep them tidy but not neutered, and the bass is often saturated in slightly more distorted ooze for a great contrast. The drums are perky but simplistic, the strength coming through primarily in the fills of the grooves. Vocals are probably the weakest component of the album, a little lower in the mix than might suit them, but capable of a more vicious metamorphosis in places like the chorus of "Raging Nightmare" where they reminded me slightly of a less carnal Jonas Nilsson from Raise Hell's triumphant Not Dead Yet. Yet, although so many of the components here really work well together, it's those guitars that constantly steal the show, whether they're galloping along like later Crumbsuckers' weird prog-thrash pacing or bursting into a Megadeth-like excess with leads and melodies, they are always resonating in my ears and lending themselves to one of the most credible and replayable albums I've heard yet from the entire Punishment 18 Records roster. Between the deft skill level and that sleek, cubicle thrash appeal that they muster, Overdrive is a winner, but I wouldn't mind hearing how they develop their style into something even more insane or sinister or muscular sounding in the future. Either way, this is a band I will continue to follow, because they capture that precious novelty I felt as a teenager in the 80s, exploring hundreds of paper route-purchased thrash cassettes through the genre's prime.