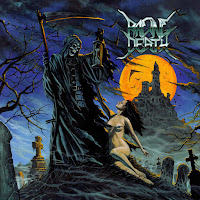 The cover of this album had me doing a double-take, not because of the obvious necrophilia laws being broken on it, or these guys are striving really hard to return to the 'source' of their style with one of the most generic monikers I've seen in years, but because within a small span of days, Punishment 18 has ALSO released the debut of a German band called Running Death. I bet those Italians over there are getting a real chuckle at this, but I fear the joke might be forever lost on us all if both albums turn out quite so mediocre as this one in particular. Reaping Death, Racing Death, Raping Death, Ripping Death Ricocheting Death, Rollerskating Death, I'm sure all of these must be in the pipeline somewhere. But surely I jest...right?

I'd hesitate to outright accuse this debut of being the sort of sidewalk-bound pizza thrash we hear so often, young bands recycling a handful of riffs from the 80s and then attempting to resurrect the old aural cues like flies from amber...and yet, that's kind of what this is. Raging Death is about velocity, pure and simple, a slightly more melodic brand of thrash than most of the harder West Coast stuff of the Golden Age, threaded with triplets and riffs that sound like a sort of heavily NWOBHM-soaked Destruction or Necronomicon. Progressions arrive at a fairly fast clip but are almost unanimously predictable in structure, often with harmonies that leave me with an aftertaste that seems like what Running Wild might have sounded like if they were more of a thrash act in the vein of Master of Puppets. The Polish band does not necessarily lack for energy like they do for compelling ideas, but the biggest issue I had was that the rhythm guitars seem to have this volume and bluster which outstrips or outpaces the snappier, thin drums, almost like meat so excessively steamed that it surely peels off the bone, and a number of tunes feel indistinguishable for others, which is obnoxious.

The accent of the vocals definitely recalls a lot of East European and Teutonic thrash of the 80s, somewhere between Destruction and Wolf Spider, with lots of elevated screams and at the end of phrasings, and this is perhaps one of the strengths, because though they could easily be written off as a sort of 'this is how thrash SOUNDED' caricature, they are at least pretty fun, whereas the picking parts, as hard as they might try, seem at best like mediocre plays on Mortal Sin's sophomore album or some other forgotten record that arrived humbly at the point that thrash had already reached its saturation point when it actually mattered the first time. The bass guitars don't pop out on this disc at all, and the riffs and tunes, while not always incompetent or uninspired, simply don't blend in with strong vocal lines or chorus hooks to produce anything more than a samey rush. If you are into any of the other bands that I listed here, or perhaps some of the first two Artillery records, or the debut by Vendetta, then this might satisfy a niche craving, but the mix, presentation and songwriting are just not at a level yet beyond the raw reproduction of an era and aesthetic. I've heard worse, surely, but also a lot better. And speaking of Shirley, traipsing around the graveyard buck naked might not be such a great idea after all.