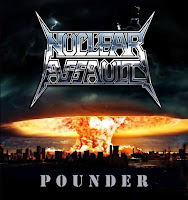 Had Pounder been released somewhere between 1985-87 as a filler EP between Nuclear Assault full-lengths, it might have made a little splash as eager thrash fans snapped it up off the shelves when this New York legend's iron was still pretty hot. As it stands, the material contained here, being produced so long after the band's prime, with intervening decades of nothing worthwhile happening whatsoever, no good records, seems insipid at best. That's not to knock it completely, because the four tunes here sound intrinsically like the Nukes you remember as a teen (or I remember as a teen), but it feels like too little too late and I were to randomly cast an audio dart at any track off the full-lengths, excluding the itty bitty goofy ones, I would wind up stabbing something much more memorable. Ten years after the most horrific and boring album of their thrashing careers, Third World Genocide, it just doesn't seem like enough.

The band has not moved forward in any meaningful way in terms of progressing its ideas to a modern context, nor is it writing nostalgia that eclipses or even matches the best songs of Survive, Handle With Care, and Game Over... I might say that they at least 'try', but the majority of riffs here just seem like they might have been scraped up off the cutting room floor 20-odd years ago. "Pounder" itself is your typical mid-to-fast paced rager like what the band would often kick off a record with in the past, and "Lies" is your analog for a classic headbanger like "Brainwashed". If I had to pick the best of the cuts, though, it would be the closer "Died in Your Arms", which is this swaggering, burly tune in which the buzz of Lilker's distorted bass lines owns up to the rhythm guitar chords, the leads seem bluesy, sporadic and atmospheric, and it really doesn't feel like much of what they've put out in the past. The mix of the entirely EP is appropriately dirty, definitely straddling the line between the first and second albums, and I kind of dig that...but by the same token, I wouldn't have minded a massive sounding modern Nuclear Assault that just wrote killer hooks that twisted my head off.

Connelly might seem a little aged in his inflection, but I think for the most part he continues to create  that frustrated, constipated anger that made him unique in the 80s. Otherwise, the band sounds pretty much business as usual, had that business been conducted back when it mattered. Again, I can't be too hard on the thing, because at least the tracks here aren't as miserable as the 2005 album, and they do feature a nice balance of tempos sort of like The Plague EP. But this is a band that used to make me want to arm myself with a spiked baseball bat and storm the streets, burning vehicles and beating up Cold War mutants, and there's just nothing kinetic or memorable enough here to invoke that same delinquency from my inner thrasher. The best this is, is 'non-bad', and I guess that's a start, but one that they'll have to capitalize on by reaching into themselves and pulling out that rage, those nights of dirty clubs and cigarettes, the political unrest their music used to address. Pounder tells me that it is a possibility, but doesn't justify its existence to me beyond that simple tease.