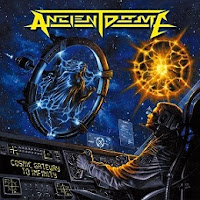 The danger in combining science fiction concepts with thrash metal is that it so rarely feels like the proposed amalgamation, but a little too weighted on the one or the other. A few modern bands like Vektor have managed to avoid that issue by writing technical and frenetic material which recounts many of the greats of the 80s, but the era of hearing a novel band like Voivod or D.B.C. seems buried forever more. It's not that I'm expecting a Killing Technology or anything when I come across one of these shots in the vacuum, but at least something unique that conveys the atmosphere of the future, or the unknown, experimenting with chords and song structures that mirror either the alien or technological implications of the subject matter. Cosmic Gateway to Infinity, the third full-length from Italian power/thrashers Ancient Dome, falls well shy of this goal, but at the very least this seems like an attempt at melodic, majestic riffing that isn't just pretending to be Exodus or Slayer from their prime, instead picking up tiny traces of slightly more obscure bands like the great Heathen, who played with a similar mix of styles.

Transitions are often a little abrupt and lack power here, but they've got a nice crunch on the rhythm guitars that serves as a concrete foundation for the melodic avenues they trend towards. I definitely felt a little Victims of Deception here, with a few nods towards the first, excellent Mordred album Fools Game, and a healthy heaping of late 80s Paradox (the German band), which is in itself a rarity. There's a power metal thrust to it all, which ideally might manifest in something like Artillery's brilliant By Inheritance, only the way the Italians build their rhythmic pairings is nowhere near as layered, complex and unforgettable. These guys seem to just dip their toes in the water of what a potent melodic power/thrash album might be, without committing fully, and the little lead fills and other transition bits often feel a little loose and jarring, unable to accumulate into the raw, inspirational power needed. That's not to say they suck, or put in little thought to what they're playing...this is head and shoulders above a lot of the mediocre pizza party thrash that for some reason seems to have carved out a new 21st niche of trendy plasticity, but where I would go into a tune like "Empire of Lies" or the semi-flashy instrumental "Nebuloid" with some degree of excitement, I always came away thinking that were was just a lot of wasted potential, inconsistent riffing...and, well, the vocals...

There are two styles of singing here, one of them a cleaner, accented voice which is is a little limp, if not unpracticed, and the other a more psychotic, meaty barking which sounds like Belgium's After All jacked up on steroids. One of them simply does not equal the other, and while the former does at least offer a little versatility and the ability for Ancient Dome to traipse further into Euro-anthemic territory, the latter feels just so much more appropriate when the riffing gets some punch. Neither is all that distinct though, and I can't help but feel that a more vicious approach would have done the music better, even at its more warm and friendly. Other factors, like acoustics and at least one lower pitched narrative voice seem forced and awkward, attempts to insert a little more variety and perhaps a science fiction narrative that simply do not impress. Drums sound good, and the bass lines are smooth if not adventurous, but what I'm listening to here is about 60% of an excellent album that badly needs some further development to succeed on a world stage. Frankly, there a ton of us closet freaks for Paradox, Scanner, Toxik, Realm, Mordred, and Heathen who would love for a band like this to take off, but despite an earnest attempt, colorful artwork, and a degree of imagination, Cosmic Gateway to Infinity is not going to be that diamond in the void; but it's not exactly space debris either. I don't hear a record like this every day, so there's at least that amount of appreciation.