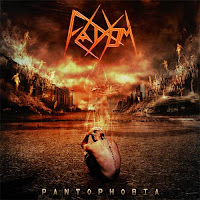 First, a moment of silence for the fact that Pantophobia is not, in fact, the fear of wearing pants, but rather the fear of just about everything under the Sun. Fadom reflect this with their choice of rather cheesy photo rendered cover artwork, a man crushed by all the world around him, though I'd imagine we might not fare much better off ourselves if the city was alight after a bloc party with a bunch of arsonist phantoms. This is a Greek thrash act that we might consider among the second or third tiers of that prolific but unsung scene; not as known as Suicidal Angels or Exarsis, but managing to score a deal through the recently defunct Athens Thrash Attack imprint. The title of the band's earlier EP, Thrash Bandicoot did not hold out much hope that this would turn into a high tier modern thrash act with anything on its mind beyond being 'in' on that oh-so-funny joke, thrash metal!!! But in their defense, Pantophobia hardly comes across as any sort of self-aware mockery of the medium, more a solid if ultimately unremarkable paean to a lot of the lesser known American acts of the later 80s.

There's a little bit of clinical, cutting melody to the guitars which recalls records like Kreator's Terrible Certainty or Destruction's Cracked Brain, but I actually got a strong whiff of Arizona's criminally underrated Atrophy, what with the biting, snarled vocals (also a little Schmier there), the gang shouts, and some of that appropriately saturated rhythm guitar...especially in the title track, which is not bad at all. Another influence I picked out was the Megadeth of the 1990-92 era, specifically the little groovy rocking guitar fills executed at the end of progressions like those in the unfortunately titled "Thrasholution (Thrash is Solution)". The tracks offer a pretty fair variety of breakout speed/heavy metal licks, mid-paced neck strainers, safe but well structured leads and melodies that capture a lot of their inspirations without ever threatening to surpass or innovate upon them. I think the mild reverb and other vocal effects used here due a lot to apply just the right quota of once-future nastiness to the delivery, but at the same time the rhythm section on the album seems to do little more than click with the construction of the guitar, in other words...this is a record driven purely by the guitarists (one of whom does vocals), and everything else just sort of falls in line.

Pantophobia is unlikely to turn heads enough to matter, but as derivative as it might seem in spots, it clearly shows the band's proclivity to do a little research into the bands they were giving tribute. Not all the riffs blaze, but there were enough of them to spark a little fire of nostalgia for back when nearly every thrash album I was buying felt like some pioneering force among my metal collection; when bands were taking the formulae of Slayer, Possessed, Metallica, Anthrax and the Germans and then running with them. I could do without the shitty "Thrash...." song titles (one of which is sadly the titular cut of their previous EP), but it seems like a crop of these bands feel like they have to wear that as a badge or all the fucking poseurs in the audience won't recognize them for what they are. The down side is that the practice ends up painting its users in quite the same strokes. Which is clearly not necessary for Fadom, because they are a solid group with a lot of the right sounds and influences that has no need whatsoever to devolve into pizza party territory. "I get it, I get that you are playing thrash metal, or else I would not have checked you out to begin with." So, apart from a few annoying choices like that, Pantophobia is not bad at all...I banged my head a few times, remembered why I liked this music in the first place, why I continue to enjoy and defend it decades later, and that's how these things go.