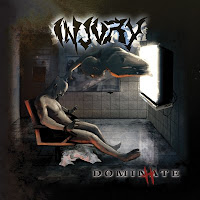 Sometimes it's clever to conjoin a few words and create your own, and other times it's pretty dumb. Dominhate, the title of Injury's second full-length record, is a case of the latter, and for some reason this practice is more common in thrash metal than the other niches of the genre. I get it; it's a slight means by which the thrash bands of the now can attempt to escape the constraints set up before them by their looming, incalculably superior influences from the 80s, but it's the music which should really be attempting that prison break, and once you've nailed that, I think you can worry more about lyrics and titles and so forth. Now, beyond that, these Italians' sophomore is not exactly a 'brain dead' record, but rather a functional and somewhat forgettable fusion of Teutonic and West Coast influences into a cohesive whole that is greater than your average pizza-thrash throwback, but lacking in the distinctiveness it would take to really stand out among a swarm of such bands hailing from Western Civilization, who celebrate the past by reliving it rather than reinventing it.

All that said, Dominhate is not a bad record. These guys play with a little conviction, generally dwelling in that mid-paced headbanging range which might reflect a mixture of modern Exodus and Tankard, with the real roots of those bands' 80s legacies showing through like fading hair dye. The vocalist has a heavily accented inflection which to me seems like an Italian alternative to the mighty Gerre, some genuine vicious qualities that give it an immediate character along with that accent, and just the right amount of gang shouting or reverb to help keep it interesting as it howls across the rhythm guitars. Speaking of which, they're punchy and meaty and varied enough to maintain an interesting flow through the album, though they often break out into these pretty bland progressions that are only made interesting by the more surgical harmonies the duo applies at the end. This is yet another band where the rhythm section seems to do little more than its own job, and as such I really felt like the bass-lines and peppy drums rarely broke out beyond the riffs, which take center stage throughout the majority of the record whenever the front man isn't exuding his wildest lines. But that's alright, because the leads and rhythm structures keep it fairly rounded and interesting.

Lot of chuggy thrash here, but it's slightly more nimble and dextrous in the post-80s-Slayer vein rather than devolving into a more brute metalcore style. I've had mixed reactions to a lot of the modern thrash output from bands like Exodus and Onslaught, but I think this disc fits squarely into that sort of company, with modern analogs in an Evile or Warbringer, maybe a little less Metallica beyond just that beefy precision which was obviously influenced by Master of Puppets in most cases. But you certainly get a German flair here too...whether it be Tankard, or Vendetta's second album Brain Damage, or Destruction, or the latest Accuser disc which was surprisingly good; these guys fit in rather well with their European precursors and counterparts who are ultimately going to be the biggest audience for this particular release. I think the material is solid throughout, if not exceptional, and they might be most memorable when they're doing tunes with more effects in them like "Fashion Swine" or "Ride the Riot". Not an album I'm in love with, but it very clearly shows a level of effort well beyond the lazy pale of trend-jumping nostalgiacs, and those listeners invested heavily into the second tier thrash of the 80s and beyond will find themselves comfortable here; if that bill fits you, then at least give it a spin through.