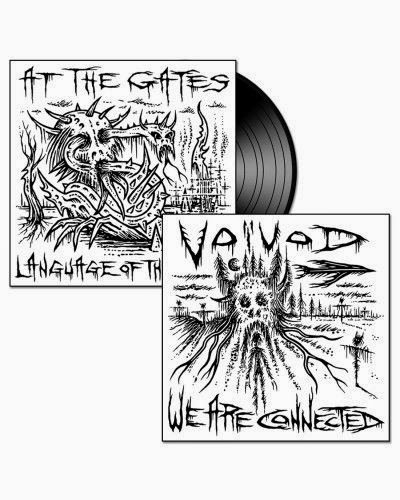 At the Gates and Voivod are not really two bands I'd associate with one another whatsoever beyond the fact that they are both successful, both longstanding (more so in the case of the latter, who never took the near decade hiatus), and both able to tour much of the waking world and inspire much fan obsession. Speaking of which, when it comes to the Canadian half of this equation, I am guilty as fucking charged. At the Gates is a band I enjoyed through much of the 90s, but not to the rabid level that a lot of local New England metalcore aspirants and devotees ended up making entire careers out of thanks to a single groove and an exclamation of "Go!". Their reunion record, At War With Reality, was one I found to deserve neither the heavy accolades it got amongst some of the slavish press, nor the incessant negativity it inspired among those who seem to hate just about any band that ever made a name for itself among that terrifying crowd of Others beyond their Inner Circles. Like clockwork, people, I can't even make this shit up. At any rate, that disc just sounded to me like a band who wanted to play it relatively close to the hip, while exploring a fraction of the polish and maturity that might have transpired had they gone major label after Slaughter of the Soul; and to that extent, it was fine, I listened to it a few times and shelved it right next to Surgical Steel.

Their contribution to this split is unfortunately not exclusive. "Language of the Dead" is available on the bonus disc to At War With Reality, and it serves as a fairly loyal representation of their classic melodic Swedeath sound, hints of Dark Tranquility's morose melodic sensibility embodied in some pure Slaughter of the Soul pickings, the harmonies strong enough in listening but not very resonant once the smoke clears. Lindberg's vocals still have some bite to them, but they seem a little more phoned in, too 'level', lacking the uncouth emotional punch he once possessed in the band's heyday and thus occasionally smothered in the guitars. Though this is a solid tune, I can see why it was not part of the final selection for the full-length. The drums sound fine, the acoustic segue seems almost inevitable and doesn't really add much to the song except to reinforce the contrast such parts always created on their older recordings. The main issue for me is that it is ENTIRELY OUTCLASSED by its companion here...

I can assume "We Are Connected" will not remain a staple of this 7" either, likely to be released as a part of Voivod's forthcoming new full-length, but it is a fucking fantastic, upbeat track, with intricate Piggy-esque licks proving once again that Daniel Mongrain was the 'right guy for this job', adjoined to pumping bass-lines. Seriously, I was shocked to shit when I realized this wasn't actually Blacky playing the bass, but the Canadians' latest acquisition, countryman Dominique 'Rocky' Laroche, who is as much a mirror for his predecessor as Mongrain. This guy was hiding in a blues band? Welcome, my friend, come and drink the nano-water and stay a part of this well-oiled machinery forever, or at least until Blacky's next nostalgia trip. Say what you will about the album's title being a callback to the robotic voice in "Killing Technology", but this tune truly captures the essence of classics like Dimension Hatross and Nothingface in the contemporary flesh of Target Earth, and if it's a true indicator for the coming material then I am beyond stoked...fell in love with it the first time I heard it, and the courtship is still thriving.

Now, as for the 'value' of this Century Media split on the whole...I can't really say. Once "We Are Connected" appears on a proper full-length, then this is almost entirely worthless spare the cool black & white artwork, which was done for both bands in the Voivod style. In fact, I almost wish At the Gates had written a new tune for this with a slightly more dissonant, outlandish Voivod influence, now that would have been something to make this special, especially if the Canadians had an exclusive original too. "Language of the Dead" just seems like a lazy choice, probably a label choice, and it just has nothing in common with apart from, you know, it being metal on the same label. So ultimately, I'm feeling really neutral on this, apart from the artwork, and can't really recommend that anyone do anything more than sample the songs online and acquire the respective full-length albums at your convenience if you enjoyed what you hear. But Side B > Side A, all night, and all day.