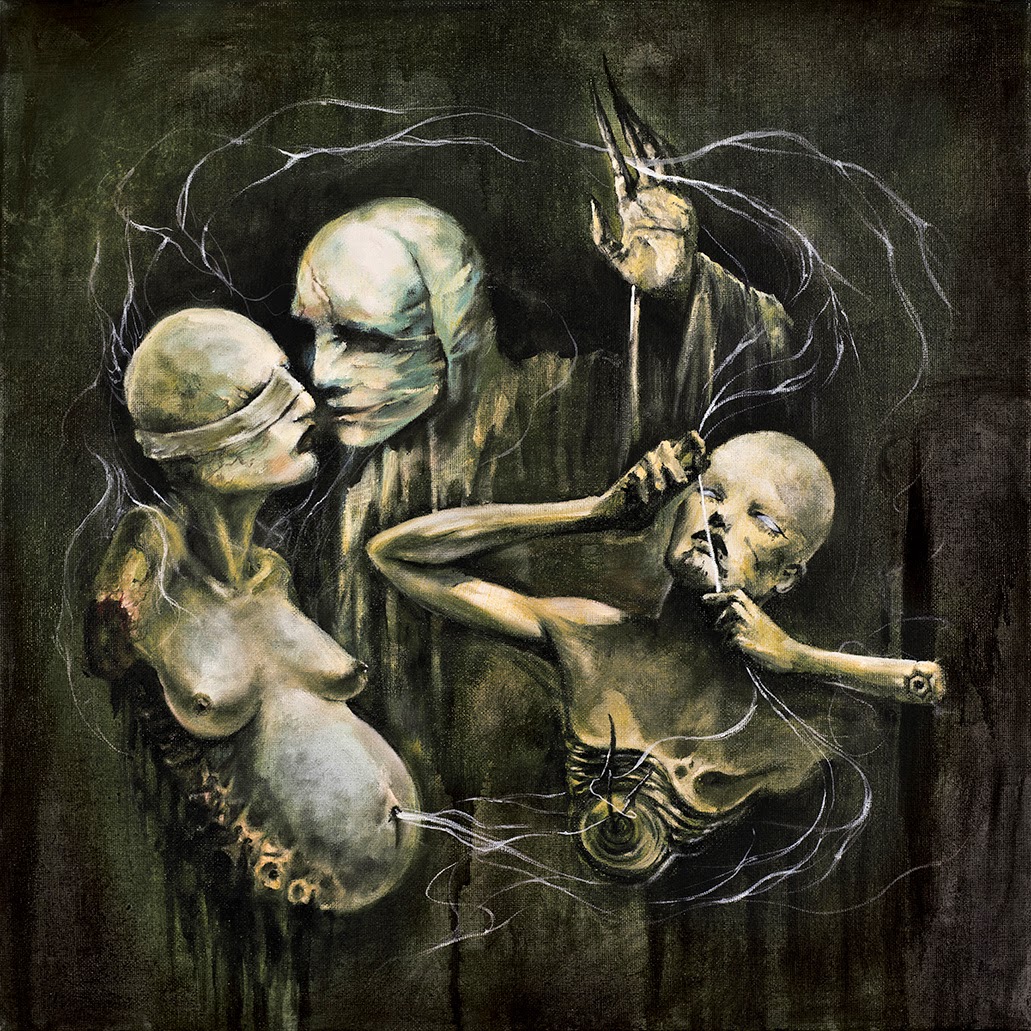 After decades of split recording exposures, I'd be lying if I said that the medium hadn't grown a little stagnant for me, largely because the lion's share of these things simply possess no semblance of studio consistency or creative coherence. In so many cases, it's just product pushing with buddies or complete strangers, in a limited format. But of course, when even a fraction of the imagination is applied to this process, you can come up with gold, with two or more artists functioning on the same page, producing a recording that has an intrinsic value beyond just a flag-waving collaboration for some label, scene, genre. As for the three Greek acts responsible for the Moerae LP, they have gone well beyond such a 'fraction', and put together something visionary and thematic which is far more than the mere sum of its parts...

Three tunes, each over 16 minutes in length, and each devoted to one of the Three Fates of Greek mythology (or moirai, or Moerae). You could say that it was in the blood, because what the bands have produced is not just some simple gimmicky idea which falters in its execution, but a lethal dose of progressive gonzo annihilation which takes great liberties from the standard black metal troops to incorporate anything from thrash riffing to pure ambiance (especially in "Atropos") to just about anything they fucking want to include. You're still getting plenty of air-time for the more technical black metal attack, which is the primary impetus of several of the bands, but the fact is they have not padded out such swollen tracks with loads of redundant nonsense. Each "Clotho", "Lachesis" and "Atropos" serve as smorgasbords of the unexpected, without devolving into sheer, matchless chaos. Production is competent all around, and while the mixes of the three tracks do vary incrementally, the common length of the playgrounds they inhabit and stylistic variation are so consistent that it does feel like the bands were at least communicating telepathically throughout the process.

I've reviewed all of the full-length records by End to date, but "Atropos" is by far the most interesting thing they've ever created and I do hope it marks a glimpse into what they might create in the future. Vacantfield has a notably more progressive/thrash component to its composition, but they never fail to entice me with all the jarring effects, decrepit vocals and subtle touches like the keys. As for Awe, well this is a band involving members of at least one other superb Hellas black metal band, which I am not presently at liberty to say, but tonally their contribution "Clotho" is the best at forcing the black metal motif with a lot of dissonance and some really evil breakdown riffs which are among the most fucking tremendous across the entire experience. Instruments on the whole are mixed to an infectious level of clarity which does not entirely eschew the rawness of the parent genre, but allows the listener to more easily ingest the psychotic musical spasms. Not all the riffs are gold, and there are some moments through each of the cuts which end up less engaging than their surroundings, but
all told, it's a really cool recording. Probably the most intriguing split since Dis Pater's Converge, Rivers of Hell from 2013, in which the Australian musician explore a similar mythic concept through three of his own projects. Track this down, whether you're a fan of the more eccentric Greek black metal wizards or just compelling extreme music in general. Fucking great.