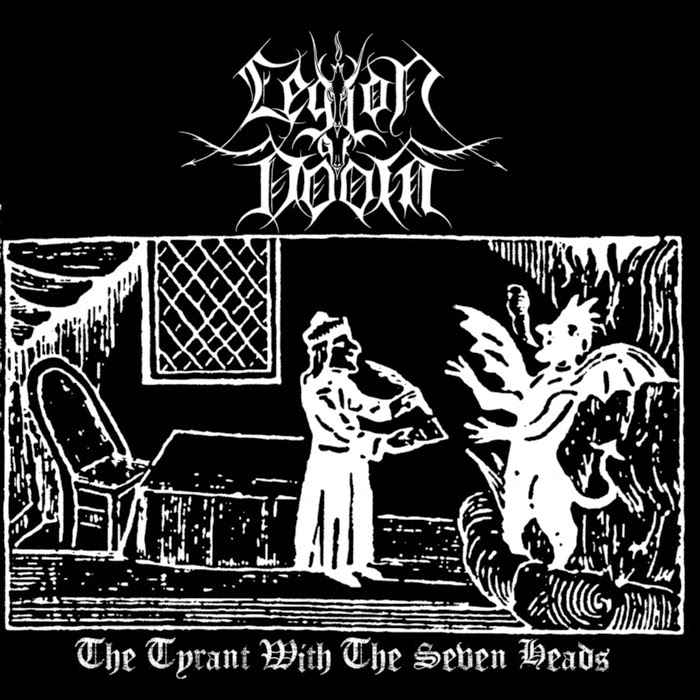 Had you asked me 15 or more years ago, I might have told you that Greece's Legion of Doom was a competent proponent of traditional European black metal that, while secondary to their more sonically unique, better known countrymen, were capable of holding their own. Sadly, while the ensuing decade produced one album of worth (The Horned Made Flesh in 2008), it was simply not a benchmark of evolution within the band's sound or songwriting to the degree that it would make many waves in a scene whose flagships had already set sail or were still in the process of treading sea. Their surrounded efforts, including 2012's The Summoning of Shadows were perhaps the most mundane in their substantial 25 year history, but the Legion presses on with a new, limited run 7" featuring two tracks.

Though they've undergone more savage transitions in the past, The Tyrant with the Seven Heads is a fairly seasoned array of melodic black metal, with heavy emphasis placed on the melancholic majesty of its tremolo picked guitar lines and the ungodly rasp of bassist/vocalist Daimon. Rhythmically the focus is on blast beat patterns interspersed with fills, pretty standard sounding fare that many would find indistinguishable from countless other bands throughout the 90s and beyond. That's not to say they execute this style poorly, because the instrumental mix here is quite nice, the guitars are very often level and harmonized and they thankfully don't rely on endless repetition of the same riffs, but at the same time there are very few guitar progressions throughout the choices here that will resonate for long since they are primarily just alterations upon others the veteran black metal listener has heard hundreds if not thousands of times before. Bass lines are buried between the rhythm guitars though it wasn't a loss I really felt much listening through.

While they do at least one breakdown of note in the B-side title cut, and a few guitar-only passages, there is just so little of note when it comes to variations in tempo or ideas, so the two tunes really feel like one-trick ponies and that's only going to appeal to a portion of the genre's loyalists who fell in love with that style through albums like De Mysteriis dom Sathanas or Transilvanian Hunger and found themselves unable to disengage in any further exploration. This is by no means a categorically  bad recording, and in fact I'd say the songs are the equal or better of most on their last full-length, but it doesn't hold out much hope that these long time under-groundskeepers will knock a record out of the park any time soon. Sure, there is an argument to be made for the fact that they stick to their guns, but the attention span of much of the black metal audience has become bulletproof in the ensuing decades, pursuing either grisly, archaic retro sounds, total headcleaning blasting blitzkriegs, or nuanced folk, prog, speed and heavy metal influences. Legion of Doom will forever have my respect, but without better and/or more interesting songs, that won't translate into a share of my ever- diminished listening time. This EP is a serviceable intro to their style, but interested parties would be better off tracking down For Those of the Blood or The Horned Made Flesh.