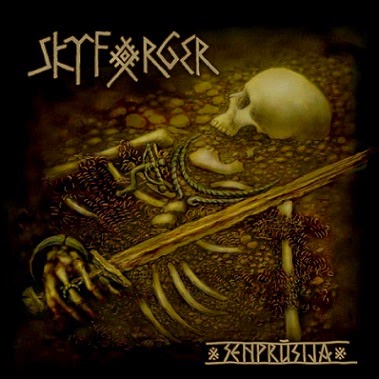 While a large percentage of the pagan/folk metal crowd seems to have reduced itself to a band of lively, gallivanting minstrels who have watched Lord of the Rings and Braveheart to the point they can recite them line for line, there are particular bands among the lot which have long stood head and shoulders above their stylistic peers. Latvia's Skyforger is one such name, a group that has always taken itself and its devotion to craft quite seriously, and perhaps more importantly, offered us an historical view of a particular culture and region of the world that many of us Westerners might not be so well versed in. Granted, not all of us are necessarily going to understand the lyrics until we have translations available, but I personally don't enjoy the aural ingestion of these records nearly as much as when they are offered in the native tongue, and judging by the relative popularity of records in Norse and/or Finnish, I do not feel the language barrier is much of an obstruction at all to anyone seeking sincerity.

Though several of their earlier albums were cut more directly from a black metal cloth, the band had taken a turn for the slightly more accessible with their prior record Kurbads, which was among their best material to date, and sixth album Senprūsija ('Old Prussia') is a loyal followup to that with grimmer artwork and a lot more aural callbacks to older discs like Kauja pie saules (1998) and the Latvian Riflemen (2000), meshing together lattices of inspired, memorable Scandinavian-style black metal riffing with some overt heavy metal and blackened thrash influences. It's not that they constantly innovate the chord progressions, but they take great care to ensure that almost every guitar pattern on the record sticks to the ears, and there is this constant variation in the rhythms which is a mix of lethal intensity and more celebratory pomp we generally equate with the folk metal medium. The guitar tone is rich but cutting, anchored by just the perfect level of buzz on the bass and constantly punctuated with tasteful leads that honor a hard rock tradition without ever becoming exceedingly flashy or frivolous. Curious harmonies and an excellent balance of the drum kit round out the production to what is possibly their best ever, and I found there is nearly no means by which I could predict what exactly was about around most corners in the songwriting, though they never break their character.

Character. That's so important here, and rather than some bunch of misplaced teen angst troubadours diddling their fiddles in the Renaissance Faire restrooms, Skyforger wins on personality over just the novelty of mixing heavy guitars in with traditionally inspired ballads and chords. Peter's vocals continue to serve as a Latvian analog to the great Martin Walkyier (Sabbat, Skyclad), gruff and growled and appropriately ugly alongside the deeper, clean backups; this approach happens to function fluently with the language, and the lack of anything remotely silly going on in the background enforces its efficacy. At the same time, I don't want to make this seem like its overly misanthropic or spiteful sounding music. Aggressive and well balanced, but there's a hearth-like quality, a warmth and pride that resonates through the structure of the songs, and the rawness of the bass and bleeding of some of the tremolo picked guitar lines never completely jump ship on that underground black metal aesthetic which permeated the first few records. This is a good band. The near hour of material they've assembled is extremely consistent, with many of my favorite tracks ("Melnas buras", "Nekas nav aizmirsts") coming even in the latter half when most albums' fire has already died down, just ceaseless successful recipes of traditional heavy/speed, black and thrash licks dowsed in the cauldron of history. Take the ladle and drink.