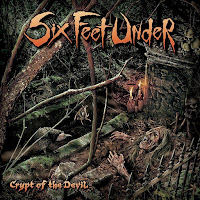 For Chris Barnes and Steve Swanson to 'arm' themselves with a trio of Cannabis Corpse members on this 11th (original) studio album turns out not only to have been an interesting ploy, but one that more or less pays off, giving the long mediocre act a fresher sound that complements the veteran vocalist's gruff delivery with some more elaborate and intricate musicianship. That's not to imply that Crypt of the Devil is somehow flirting with technical or brutal death metal territory, but the riffs themselves here have a  more insistent, consistent, compelling quality to them which offered me a lot more mileage and unpredictability than the lion's share of garbage mock tough guy Obituary grooves that populate the 6FU canon. In fact, in a different world, where the band's career had ignited with the shockingly memorable Undead, my raining favorite of their catalog and the only one I own, and then suffered a few growing pains with the less impressive Unborn, and at last ended up here, I don't think this band would have ever had such a frustrating, divisive response from the casuals and haters.

Crypt of the Devil is not exactly the second coming of The Bleeding, and I've already hinted that it does not surpass the catchy Undead, but it's interesting how it partially mirrors recent Cannibal Corpse fare like Torture in its construction. The riffing progressions here are corpulent, adventurous in a semi-clinical death metal fashion, often akin to records like Bloodthirst which rank among Barnes' alma mater at their prime. Though some of the punch to the patterns does exude a Cannabis feel, the guitars are more muscular in the Six Feet Under fashion, the bass lines oozing like a leaky whiskey still into the swamp water, and a few bridges accelerate into some tense patterns where a few more melodic, trilling hooks offer aural callbacks to Barnes' most famous appearances. Some of the harmonic guitars splayed out over meatier rhythm tracks in lead hooks feel similar to what Carcass did on their reunion record, and even though there's a general sameness between a number of the cuts, you can often expect the unexpected, with a great lead sequence or riff break coming out of nowhere which is suddenly more adept and memorable than the rest of the disc. The drumming and bass often ceded to the density of the riffs, and Barnes growls a little too monotonous for what is happening around them, but that was occasionally the case on Undead and it did not dull my reaction to the songwriting whatsoever.

Coupled with the classic death metal cover artwork, Crypt of the Devil is really just what these guys have been capable of delivering to us all along, when they weren't too busy being lazy with lopsided, meat head groove death. It feels like both a self-tribute to those final years of Barnes' run with his old band, and a more involved and musical direction for the band to progress towards in the future, even if these particular player were only along for the studio album itself. It's not going to be a popular opinion to take the guy seriously after so many years of keyboard crusader mockery through the metal underground, but it very clearly sounds like that more legitimate Six Feet Under, akin to what we heard three years ago that turned at least my reality upside down. This is unquestionably the death metal that these men was always meant for, almost entirely eschewing the dumbed down formulae that filled out so many of those first 15 Metal Blade years, and while Crypt of the Devil is hardly the stuff of legend or even the stuff you'll be humming along to in your head six months from now, I am enjoying an age in which I'll see this band's logo somewhere and not take the easy reaction to write it off. Just Death Metal 101, straight from one of the campus alumni and assisted by a number of ace grad students who want to make him sound as good as possible.