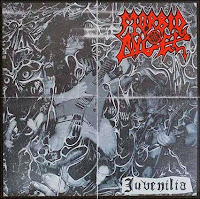 One has to wonder: is the title of this retro live album released for Record Store Day 2015 simply a nod to the fact that its date of recording (November 1989) being a moment in Morbid Angel's formative, 'juvenile' (aka important) history, or is there something potentially backhanded going on as some sort of meta reference to the overwhelmingly negative response to the band's last full length album where they suddenly thought they were Nine Inch Nails and Ice T? Obviously it's the former, right? At any rate, at least they got the wretched 'J' out of the way in their alphabetic catalog titling, and this is a limited release 12" record which some people will feel really lucky to have picked up, and the rest will just have to borrow it from one of said lucky individuals or listen to a rip online. Like its cover artwork and title imply, this is all material from a single gig, in Nottingham, in the late 80s, which means it involves Altars of Madness and little else...fine for me, since that happens to remain my favorite Morbid Angel disc.

In fact, it's pretty much that entire album, only performed in the live setting and not a particularly good recording, so I'm willing to bet the album ends up as a collectors' trophy, perhaps hanging on a bedroom or basement wall for cred, and not listened through very much. That's not because the band does a poor job of it, in fact the music hits here just like the wall of force it provided in its studio incarnation, only being a relatively primitive gig recording I feel like the bass and rhythm guitar levels kind of blend into this monotonous murk slightly upstaged by the clap of the snares and cymbals and the roiling bark of David Vincent. You can make out the gist of the notes on parade, and sure they sound just as fresh and evil structurally as they should have in '89, especially during the percussion breaks in tunes like "Immortal Rites" where the tremolo picked guitars break out on their own. As a whole, the recording is rather clean, the pacing of the set non-stop and furious, but it all just feels rather dry due to the restraints of the equipment used to capture it, and there is just no situation in which I'd ever want to listen to this over Altars of Madness itself, where you get all that depth and vivid, extradimensional carnage. I mean, Earache and the band know this, thus the limited number of copies...more confidence would mean more in circulation, in more formats.

So it's visceral, and the band were ablaze at the dawn (and arguably summit) of their career, but the reels here just don't do the songs as much justice as you'd hope. Which is, let's be honest, not going to bother a lot of underground death metal fans who seek out demos and rarities and thrive off the very primacy that the older recordings espouse. It's still a thrill to hear "Chapel of Ghouls" and "Lord of All Fevers and Plagues", and if you're a huge Trey fan, he starts sporadically showboating for a few moments after "Chapel...", which is frankly irritating and unnecessary in any context, at any time.  I guess my one takeaway here is that it just reminds me again of how great Altars was, and I hope the band sit there with this on a stereo, laugh at the shoddy recording quality (not the worst I've heard, but not very good), and then suddenly get swept up in reminiscence of when they were on top of the freaking world. After which, I sincerely hope they channel the nostalgia into their next studio recording, because I feel like they've been firing blanks since good old Y2K and I'm all about redemption. This is certainly a band capable of reining in the chaos of their roller coaster existence, and I want to believe they shall once again. But no matter what happens, we'll always have Altars of Madness, and at the very least this live recording reminds us (or reveals to us) how incendiary they were in front of a crowd. The band on this vinyl was a great one, regardless of any auditory deficiency.