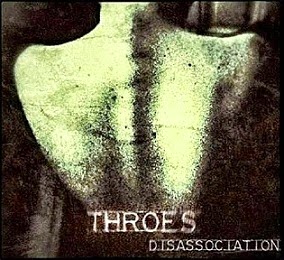 It's instantly obvious, even without hearing the music itself, that England's Throes are going for a different angle within the black and death metal spectrum, starting with a simplistic cover image redolent of hardcore records from about 10-20 years ago, and then following through with a lyrical concept that deals more heavily in substance addiction and personal trauma than the occult, winter, or ancient civilizations. I'd hesitate to dub them 'urban black metal', but clearly Disassociation is a record aesthetically cast in the vein of December Wolves' streetwise black/thrashing epic Completely Dehumanized, or several of the works by their own countrymen Anaal Nathrakh, who have a more brick-in-the-face sound than this, but also dabble in a mix of the extreme metal medium with flourishes of electronics, ambient and industrial nihilism. You won't find such a massive level of diversity on this particular record, but even within the tighter constraints this duo has manifest I heard anything from Godflesh to Ulcerate to some of the most ceaselessly intense and blasted black metal the Scandinavian territories have ever produced.

Legions of razor-edged tremolo pickings fluctuate against higher-pitched, dissonant atmospherics to produce an unsettling but persistently forceful experience, while the drumming is more or less an engine of madness firing up every nauseating narcotic fit of the rhythm guitar. Bass lines are crud coated, sparse grime like what you'd find on the hull of some filthy cargo liner left in a polluted port too long, and then the resulting mass of writhing, blasting. It's not punishing to the point of monotony or irritation, because the duo knows precisely when to let an atmospheric passage take over the proceedings, where simpler guitars will simmer off a more minimal beat and the caustic growls are spent with a little more tortured sustain. A lot of rhythm guitars in tunes like "Narcoanalysis" are used as an additional layer of percussion, creating this whirlwind of syringes and despair that escalates into thicker, monster double kick batteries that leave you so bruised that any release from their racket becomes a relief...and this will come in the form of creepy, cleaner guitars, samples and other embellishments which serve the discomfiture of the theme they're exploring. Sometimes this takes on an almost surreal abstract, dissonant fusion quality which feels like you're being rushed through an Emergency Room through various flows of time...faster...slower...

Sanity waxing and waning, life mistakes flashing before your eyes in a heartbeat. And to boot, the disc is fairly short, not overstaying its welcome. Neither does it tax the listener to the point where he or she becomes too exhausted to ever want to ride the coaster again. Throes stays in character for the full five cuts and 34 minutes, but there is just enough unpredictability to each individual piece that you won't ever quite work out exactly where it's going until the storm is already knocking on your door and by then it's usually too late to find shelter. There are certainly some riff progressions which are stronger than others, the latter usually being those that are used as chugs and 'emphasis' for a more strenuous, muscular production, but even if this is one area that lacks a little nuance, the guitars are not all mindless and meandering, but rather focused and functional, flossing your brain with callous barbwire at their most active, lulling you into a cruel insecurity when not. As extreme as it gets, the album is not about showing off, but about contrasting the experiences of flailing anxiety, vertigo, nightmare and self-annihilation with sedation. Only a coma can cure it, just hope you'll wake up from this one.

Posted by autothrall at 8:36 PM