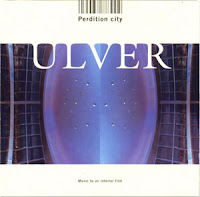 Norway's Ulver released an unbelievably raw and cold black metal album in 1996 titled Nattens Madrigal - Aatte Hymne til Ulven i Manden (translation: Madrigal of the Night - Eight Hymns to the Wolf in Man) with a deliciously evil concept: a man transforming into a wolf, becoming unchained from the will of God, with the help of Satan.

Who would have imagined that the outfit capable of that whirlwind of malignity could produce such thoughtful and beautiful music? That is not to say Perdition City is a good natured work. It is shot through with an ambiguous eerie atmosphere that lends itself to being enjoyed late at night, alone in the dark.

It's hard to tell if the band intended the title to be taken literally, but I like to imagine that the album as a whole represents the titular city, and the songs are explorations of the mood and soul of that city. It could be simply be something they thought would make a good title, but the song "Dead City Centres" and its descriptions of gangs and lone killers stalking highways leads me to believe that maybe I'm not too far off.

It's not easy to describe musically, but the main structure is trip hop infused with electronic miscellany, as well as jazz smatterings and the occasional piano or string interjection. It rapidly changes directions in its mood, from ominous to aggressive to something close to uplifting.

Although this album doesn't blow me away, it is still quite enjoyable, and has never bored me despite countless spins. All in all, it's very unique, and if you're looking for something off the beaten path you could do much worse.

Verdict: Win (you're taking a ride to the underworld, where death lurks in dark corners, and trouble is never far away)

woo, a JD review! And a most excellent one, at that.