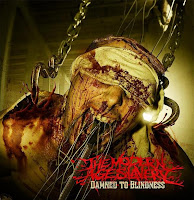 It often becomes difficult to define what exactly 'deathcore' is, I liken it to a style of brutal death metal with hardcore leanings, breakdowns, etc. In the case of Italy's The Modern Age Slavery, they temper this style with a thrashing, grinding fury and a kickass ability to deliver catchy rhythms. True aggression!

The result is a badass debut which should certainly garner them some praise in todays age of brutality worshiping spastic death metal fans, not to mention the grinders who will also find a lot to enjoy. "Red Lines of Obsessions" erupts after an intro piece, with some killer hardcore and death/thrash alternating riffs smothered in Gio's blood drenched vocals. The title track "Damned to Blindness" is a chaotic burst of excellent guitars and even a few melodic death metal/metalcore breakdowns which didn't disappoint since they break back into some more winding, sick guitars. "Drop by Drop" has a killer groove to it. "A Desert to Die For" is furious and fantastic. "Vile Mother Earth" opens with a technical battery of growling and riffing only to simplify itself into driving hardcore bombast, and then back to the death metal. The rest of the original tracks are likewise killer, and to top it off they close the album with a cover of Entombed's "Wolverine Blues".

I'm often very critical of a lot of the metalcore/death metal hybrid, but The Modern Age Slavery performs it far better than most. True intensity, cutting riffs which are catchy and memorable, savage vocals that do not disappoint, and simply a good sense of taste in their songwriting. A splendid debut and hopefully the start of something bright for these men!