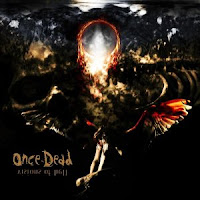 There are very few Christian thrash/speed metal bands I've ever cared for, usually because the music is not enough for me to listen past the silly message. Exceptions have occurred, and Vengeance Rising was one of these exceptions, since they had an over the top and hilarious style of punch you in the face for Jesus thrash. The lyrics to classic tracks like "I Love Hating Evil" and "Human Sacrifice" are forever ingrained in my memory. This new band Once Dead were supposed to be a revival of that band, name for one of their albums, but without vocalist Roger Martinez (who really 'made' that band, in my opinion). So this is essentially a new entity but they have the same punching thrash style of that earlier band. The band's roster is also partially culled from other Christian metal bands like Deliverance and The Crucified, as well as a former Hirax bass player.

The new vocalist does some growls and tough guy hardcore vocals which do nothing for me. The lyrics are very simple and preachy, but this was to be expected. The riffs are all middling thrash which, without the classic Martinez vocals, don't create any memorable tracks. Occasionally there are tracks which remind me a lot of tough guy NYHC, like Sick of It All or Judge, except not good. The mix is alright, the bass is nice and thick and the guitars have the same punch they used to.

What more to say? I actually liked a few of the Vengeance Rising albums, but this is kind of crappy, and it's not like I'm going to be tuning in for the 'message'.