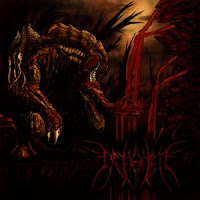 Another solid if not impressive death metal debut hath arrived, this time from Australians Defamer. Chunky guitars, good guttural vocals and an old school, loving touch are delivered across the nine tracks. Although it felt sloppy and disorganized in some places, the majority of the material represents what I am looking for in this style: creepy atmosphere and brutal delivery. However, the atmosphere on this album may somewhat exceed the quality of the riffs.

The keyboards and chanting of "In Umbris" open the album, followed by the tumult of "In Winter It Began" and it's alternation of grinding and slower breakdowns. This is not one of the better tunes. "The Inverse Dominion" is also average, it has a nice brutal edge to it but the riffs didn't really stand out, nor did the breakdown. "The Black Obscene" is a step up, with an evil and mystical opening riff. I'd have to say the best songs are "Of the Chasm", the epic "Chorus of Whispers", and the hostile "Endless Hordes Expiring".

Lyrically and conceptually, the band dabbles in brutal occult nihilism, always a good match for the style (and always more interesting than your pedestrian gore metal). The album has a very raw sound to it, the vocals may be a little loud, but you can make out everything well enough. The band is clearly in touch with its old school influence, I can hear pieces of Bolt Thrower in their sound, especially the slower riffs. The album's not incredibly entertaining but their overall sound crushes. If they can incorporate better riffing the next time out, they're going to develop into a pretty kickass band.