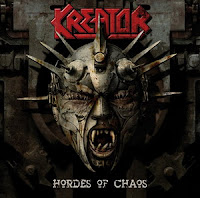 For their 12th full length album, Kreator have not only accumulated their best material in nearly two decades, but have also set the standard early for thrash metal in the year to come. Hordes of Chaos is a phenomenal new effort, combining elements from several phases of their career into a punishing, unified whole. I've only had a few days to listen to this and I can already say with certainty: it's better than anything they've released since Coma of Souls. Enemy of God might have been a nice fluff up, but this album is the money shot. What's more, it has a few features which mark a positive evolution for Kreator, namely the perkier melodies in a few of the tracks.

An example of this opens the title track and the album; an infectious, uplifting riff which transforms into 100% pure, Teutonic thrashing mayhem. "Warcurse" begins with some beaten toms and a tech thrash and then evolves into something you might hear on Coma of Souls or Extreme Aggression. "Escalation" is a mid-paced, catchy track with a great, pissed off Mille chorus. "Amok Run" actually begins with acoustics and a few lines of gothic style clean vocals, but wait...before you think you're in for Endorama 2.0, it erupts into amazing thrash. "Destroy What Destroys You" and "Radical Resistance" rage just like their glory days of the late 80s. "Absolute Misanthropy" begins with some adventurous riffing, then follows suit. "To the Afterborn" has some great melodic riffing, and it's a nice prep for the final track. After the mellow guitar/bass instrumental "Corpses of Liberty", you are treated to "Demon Prince", which begins with an amazing melodic twin lead which is far more reminiscent of melodic power metal than what you're normally accustomed to from these mad Germans. The distraction doesn't last long, as the thrash returns quite quickly and it's perhaps one of the best tunes on the disc.

Hordes of Chaos is both organic and exciting. The mix is superb and gives the songs a vibrant, live feeling. Ventor's drumming is the finest it's ever been, and the rest of the band makes their speed and level of riffing efficiency seem positively simple. This is a more melodic Kreator, to be sure, but it works here far better than on Endorama or Violent Revolution. This is a testament to the fact that thrash metal is still very much alive, and can sound new and refreshing yet retain all of its historical energy and nostalgia. For Miland Petrozza and crew, it's a major notch in the bullet belt. All thrashers of taste must pick this up when it releases in January!