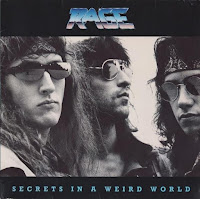 Secrets in a Weird World might not be my #1 top choice within the extensive and impressive Rage catalogue, but this is by far the album I think was most underrated, the one I thought could have achieved a high level of commercial success had it been given the exposure that a lot of lesser metal and hard rock albums were near the close of the 80s. In the age of flashy guitar heroes, it just makes sense, because Manni's playing here is the epitome of power/speed metal: intense fast riffing, great leads and melodies, and youthful passion that sometimes feels likes ramming you off the side of the freeway and then forcing you to watch as a bunch of other vehicles in the chase fly by. But it's also chalk full of great hooks, memorable Peavy shrieking, and loads of depth and creativity when compared to a lot of earlier 80s heavy metal.

The cover of Sergei Prokofiev's "Opus 32 - Nr. 3" is a brilliant little piano number to herald the flood that is "Time Waits for No One", a total scorcher and one of the very best Rage songs, witch riffs so good that 15 year old me used to sit in his basement lair and play them over and over and his little Peavey 10-watt amp (COINCIDENCE?) and congratulate himself when he'd figure one out. The screaming vocals were in full effect and I loved them, and the leads were well beyond me and even a little messy, but charismatic. And that's the thing about Secrets, it's not just this wall of force that gives you whiplash, but it has a sense of lightness and even humor about it ("Talk to Grandpa") that makes a nice contrast against some of the more dead serious subjects in the lyrics. But yeah, the first 'side' of this album was an absolute juggernaut, with four tracks that are caged lightning...I mean the riffs, vocals and choruses to "Invisible Horizons" or "The Inner Search"? Ridiculous. And "She" actually sounds like a tune that might have been on Perfect Man only with the slightly more wind-washed production that separates this album from that. Again though, Manni's playing in that one is ferocious, and its another tune that highlights a lot of the desperate, throw-caution-to-the-wind vibe to the power drumming and Wagner-Banshee wailing.

In fact this record goes nine tracks deep where I'd give it a perfect score, "Light into the Darkness" one of the most smile-inducing emotional good vs. evil power/speed tunes you'll ever hear, and the aforementioned silly number "Talk to Grandpa" still delivering the goods with a very unorthodox subject matter about mediums and seances, which is kind of fitting to the 80s era in which stuff like Ouija boards and Poltergeist was so huge (I guess it still kinda is). It's not until the 9-minute finale "Without a Trace", where the shine comes off just a fraction. Still a good song with an interesting arrangement and a number of cool parts, especially the vocal lines, but if I'm in a rush this is the one I'm definitely going to skip, there's a point where it hit the bridge and its felt as if its just gone on for too long. And that holds the album back a bit from perfection, also a little bit too snappy of a snare sound throughout that I think could have been mixed just a little better, not taking anything away from the performance itself. Minor issues, and Secrets in a Weird World is still Rage in its peak performance phase, at least for this early style they crafted in their first decade. If you can grab a version with the actual artwork and not the band photo, do so, but at least this is a decent photo with the guys exuding a kind of cool confidence at how much they know they just kicked ass. Because they did.

Posted by autothrall at 6:22 PM