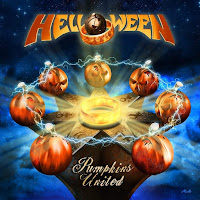 First off, even putting aside the idea that I'm a long-term devotee of Helloween, I have to praise the band for putting together this entire idea for their fans, not only as just some one-off, but as a full commitment that involves live performances AND studio recordings. For a group of guys with repertoires like this to stow any egos and past differences away and come together to celebrate all these eras of this mighty band, and then not to even rest merely on their laurels...but to push it all into the future with new material, is stunning and rare. Do I wish it could have gone even further, and a serious talk could have been had with the 'missing', surviving ex-members like Roland and Uli? Of course I do, but not every bridge can be mended, and even if the lineup isn't 100% complete they've got all the most important chefs in the kitchen.

"Pumpkins United" itself is a superb realization of this vision, with the three singers contributing their strengths, never really stepping on one another's toes, and actually working in unison to the point that you can hardly tell it wasn't meant to be this way. It helps that they've got a thundering, loaded track beneath them that is worthy of the better crop of material on any of the band's albums since Master of the Rings, with a couple killer riffs, although you might certainly argue that this one plays it safe with the sort of flowery European power anthem that the band itself pretty much pioneered in the 80s. But it's a pretty damn good one, and although the silkiness of Deris' voice, and the Dickinson/Tate hybrid that was always Kiske's forte don't always gel perfectly in direct succession, they're still giving it their all and the track was a resounding success. The musicianship and added orchestration for the B-side is all top notch, and if the music on the forthcoming eponymous album is anywhere near this good, we'll be in for a smash success, I only hope that it's got even more variation between the tracks.

As for this single as a product, there's not really much to it...I don't know that the two versions of the songs feel that differently that it adds much value, but then again I'm not sure this is going to be included on the album or if it's a one-time release. I might have to reassess my rating later, but for now I'm going on the assumption that this will retain its uniqueness and is worth a couple bucks to experience. If you do love Helloween then it's certainly worthwhile, but it's two versions of a six and a half minute track, and that's the IMPORT single...otherwise I believe it's the one track on vinyl or you just listen online.

Posted by autothrall at 7:27 PM