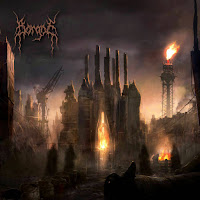 Industrial black metal acts of note are few and far between, and even when you do encounter them, they're not often the most clever hybrids between the two styles, usually focusing on some superficial elements of one of those constituent genres and then leaning into the other. Enter the creepy Swiss Borgne, a project of the ever prolific Bornyhake and keys player Lady Kaos; and while I cannot tell you that they are approaching this combination with the utmost nuance or uniqueness, their albums have become increasingly more entertaining experiences, peaking with ineffable Y, an album with which his latest, Temps Morts, pairs up quite well. A similar mix of aggressive programmed drumming, eerie tremolo picked notes, grisly vocals and eerie synthesizer atmospheres which is highly satisfying if you're the sort to close your eyes and imagine dystopian wreckage.

I'd actually say that this album is slightly more accessible than its predecessor, in that a lot of the guitar and synth lines seem more immediate to hook onto you, but don't mistake that for some sort of sellout, because this is still frightening and hostile. The beats here range from large, clanking splashes of dilapidated machinery to double bass or blast patterns that seem almost as if the guy is trolling us, only then to lay on the mesmerism through the immortally spooky guitar patterns in pieces like "Near the Bottomless Precipice I Stand" and "The Swords of the Headless Angels" (one of my favorite track titles this year). The atmosphere conjured up across this album is nothing short of revelatory, and while there does exist a fair degree of repetition, the music is so effective that it becomes a strength and not at all a weakness. Whether he's firing on pure industrial drum segues or even the more bouncy groove of "To Cut the Flesh and Feel Nothing but Stillness", there's an urgency and violence to this music that demands your respect, and I'm not sure there are many others out there doing it at this level...certainly this album hit me a lot harder than anything the comparable Aborym has done in many years.

To top that off, Temps Morts is enormous...73 minutes across nine tracks, and extremely consistent in the desolate mood it creates, which I have to say is a perfect fit to the bleak cover art of its industrial looking cathedral and nightmarish landscape. There are a few pauses in the aggression, like the softer piece "I Drown My Eyes Into the Broken Mirror" which relies more on piano lines, smaller scintillating synths and spectral whispered vocals rather than outright harsh rasps, but even there the album retains that sense of a consistently unsettling mood, and it's just another of the many surprises that will hook you throughout the album's considerable depths. Like those long cinematic experiences you patiently sit through because you realize you're getting more bang and quality for your bucks, Temps Morts is a pleasure to experience and then to revisit, even to read through lyrically, and though there's a lot of worthwhile material throughout their 20+ year back catalog, this is yet another of the most impressive albums the project has produced.

Posted by autothrall at 4:20 PM