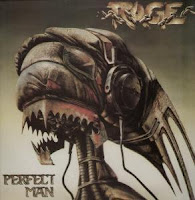 It's telling that even among the creative output that shaped and defined Rage on their earlier records, Perfect Man stands unique. For example, I could match up Reign of Fear and Execution Guaranteed, or Secrets in a Weird World and Reflections of a Shadow as aesthetic pairs, to a degree, but this third triumph is sort of its own thing, and has always remained as such. Not only does this album introduce the 'Soundchaser' mascot in a simple cover image that inspired I don't know how many apocalyptic steampunk dreams, but by contrast it also has this interesting working class metal vibe to it that sounds like a bunch of guys tired from their 9 to 5 at the steel mill meeting up for a few beers and then hitting the practice space at a nearby abandoned factory. It's also the introduction of Manni Schmidt and Chris Efthimiadis into the lineup with Peavy Wagner, and to think the trio could pull off an album this good, their first time out together, is nothing shy of shocking.

Largely gone here is the thrashing edge that we found on the first two albums, and Perfect Man exists in a kind of nexus between grimy traditional heavy metal, power and speed. The constant striving and success at pulling off memorable verse-chorus structures here reminds me a lot of the NWOBHM years, although Peavy has an arguably higher range than all but the legends out of that scene. He metes out a fairly even distribution of his melodic wailing, which always seems to be hitting his target and going just a little bit over the top, and then the more raucous mid-range heavy metal barking. When you combine this with the timbre that his natural German accent brings, it creates a distinctness to his voice that I just wasn't hearing from any other vocalist in these years, even his own esteemed countrymen like Rolf Kasparek, Chris Boltendahl or Udo Dirkschneider, all also possessed of unique styles (though Rolf and Chris operate in a similar wheelhouse). He goes a little Alice Cooper shock rock with some wicked laughs here or there, and honestly seems like a big goofball, but man is his performance on point for this album.

His bass playing, too...this album, more than any other in their canon, reeks of the 'Power Trio' tag, and that's because that straightforward blue collar feel of the production depends a lot on his low end pump supporting the very adventurous rhythm and lead guitars. He might not be a pioneer on the level of a Steve Harris, but he can play circles around most in his position, and the fact he's singing too, and always has been, puts him above the top. One of the top power metal bassists without question, and the clear and thick tone in the mix just rules. Doesn't hurt that Chris is such a great drummer too, with a forceful, fluid command of his kicks and fills that is the perfect fit to the generally faster pace of the material; and yet as good as all these aspects are, it's Manni who is arguably the highlight on this album. His riffs are loaded with all these moody, atmospheric and occasionally grimy sounding chords that were a brilliant matchup to the rhythm section, and then constantly finding ways to add just a little extra finesse or melody without ever taking it too far. The leads feel natural, bluesy in spots but just as adept as most you were hearing in hard rock or metal in the 80s, and I think it's easy to listen through this and feel like his presence is understated and singular throughout.

Twelve tunes. ALL of them excellent, a couple going beyond that to the level of transcendent for me. I'll never forget when I first heard "A Pilgrim's Path" on the local metal show at WJUL Lowell, it was my first exposure to Perfect Man although I'd heard some of the earlier tracks. I was completely absorbed at the time by the glinting acoustic intro which bursts into that mean riff and lead, and then the song has such an awesome flow to the verse vocals and epic, screaming chorus. I had to buy this album immediately, and have never looked back. "Don't Fear the Winter" is another with a similar melodic style, with amazing, driving guitars and drums, and that escalating scream into a chorus that you just cannot forget. Those are great entry points, but honestly there is nothing weak here, songs like "Round Trip", "Supersonic Hydromatic" and "Between the Lines" bring the awesome screaming lines, and there is not a single riff, bass line or drum beat over the entire 44 minutes that I would ever displace, because it's all fucking genius. And that's a pretty compact length for twelve tunes. The CD bonus tracks are also a nice addition even if they're not quite as good as the material that ended up on the album proper; "Neurotic" is a little TOO silly, but at least the music burns with some great ideas.

Even the lyrics to this album are fairly elaborate, musings about daily life and human progress and mostly fit into the consciousness of the 80s, though many of its concerns persist. It's another of the qualities that gave me that impression above of the worker, the everyman, trying to get by in the face of mass social and technological change. I almost find it hard to go on describing Perfect Man, I'd just rather play it for you so you can hear what I love about it so much. I find these sorts of reviews the hardest to write, because I can't ever do it enough justice. I can't ever give this album back what it's given to me. We all need a hill to die on, and this is easily one of mine. Its my favorite Rage album, and one of my favorite Noise Records releases in general, which is saying a lot if you're familiar with the godlike pantheon of bands that once called that label home. Along with records like Keeper of the Seven Keys Part II and Running Wild's Port Royal (another masterpiece I need to cover one day, and not the pirates' only one), Perfect Man hinted at the broad and diverse platform that power metal could one day become. Whether it succeeded on that front, or occasionally failed us with its tackier stereotypes, we can debate another time, but in 1988 this shit was ON.