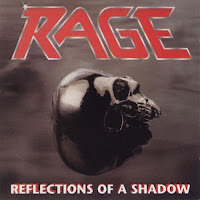 It would have been a terribly tall task to write a follow-up to Secrets in a Weird World and Perfect Man that could match them track for track, so Peavy Wagner and Rage just settled in to do what they do best...write a bunch of songs, and once again I was quite impressed with the results. The album doesn't look like much on the cover, but then, neither did the commercial release of Secrets over here. Strangely, the album kind of sounds like it looks, this is a more measured, mellow Rage that can still release the Kraken when necessary, but chooses here to attempt a more diverse slate of songs that are moodier, with a lot of tempos and riffs that felt pretty fresh even compared to their first four CD. Reflections of a Shadow is for me a closure to that 80s decade of excellence, perhaps the end of the streak of 'mandatory' early albums that I always revisit, but like its year of release might imply, the writing heavily insinuates that the band was ready to try new things for a new age, reinvent itself whenever needed without losing touch of its original identity.

This one has a nice, moody intro with brooding ambient synths and acoustics that leads into quite a contrast with the hooky, mid-paced and groovy "That's Human Bondage", which at least reveals to us that Peavy's screaming personality was well-intact, he hadn't run out of juice on the miraculous albums before it. The riffs are still ambitious and unique sounding, and the production doesn't sound all that different than on Secrets, its just that the cuts are a little more melancholic and almost depressed sounding than the joygasmic speed, riffing and chorus work before it. Take songs like "True Face in Everyone" or "Flowers That Fade in My Hand", they're more progressively paced, structured and simply go to places Rage hadn't really gone before, with awesome bass-work, judicious but tasteful use of synthesizers, and riffs that have to learn to titillate you with slower guitar patterns and more mixed cleans and electrics. Fortunately, this is not ALL the record has to offer, and you get scorchers like the title track, the crazy "Can't Let Go" and the INSANELY catchy "Waiting for the Moon", which should have honestly been a more popular breakout track for them on MTV...it's metal, but has a hard rock edge to it that reminds me of Zakk Wylde-era Ozzy Osbourne, which initially I loved on No Rest for the Wicked. That chorus totally kicks ass, and I'm not exaggerating when I say I think Manni Schmidt could play right alongside with most of the Prince of Darkness' axe heroes.

"Saddle the Wind" is another catchy fast-paced tune, but the back half of this album is full or more sweltering, slower numbers like "Faith" and "Dust" where the band is keeping its pace to try and clout you with a lot more emotion than you might expect. The metal is still being threaded through all of these, with some righteous leads, lots of guitar effects and the same superior writing tear they'd been on since the mid-80s, but again there are more clean parts, Peavy does lower pitched singing for the verses, and you get some organs and other ingredients that almost give some of these a power ballad/rock opera feel. I also like that it swings back into a heavy, driving anthem "Nobody Knows" for the finale, which is a tune that would have fit right in on Secrets in a Weird World. Overall, it's a bit dimmer and more weather-worn sounding than the albums leading up to it, but these Reflections just don't go away, no matter how many years come along and try to dilute the waters. This is another gem on the crown of a band which has sat underappreciated for far, far too fucking long, among the not-so-secret-kings of that massive German scene whose steel has barely dulled in decades.