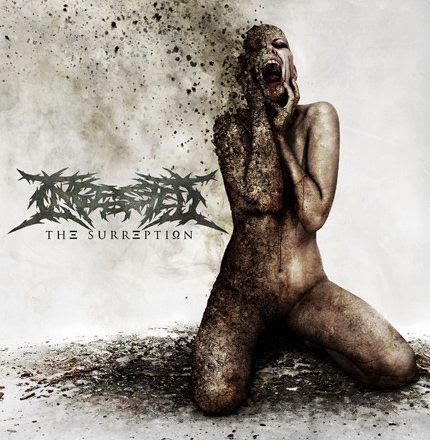 Manchester, England's Ingested released a rare anomaly back in 2009, a slammier death metal album that I actually derived a little enjoyment from, due to its rock solid production and crude but effective songwriting mechanics that carved out some memorable guitar grooves and a street-like brutality which definitely left me with an impression with the death metal medium much like what a lot of old NYHC did back in the 80s. Not to say that it was any sort of mandatory acquisition or necessarily flirting with greatness, but I had a fun time listening through it until inevitably buried with a lot of other sorts of death metal that I liked more. When the lineup's sophomore The Surreption was issued, I think I listened to it once and passed; but as a prelude to critique their latest 2015 album I've decided to go back and tackle the material once more, to see what I might have been missing...

As it turns out, not so much. One area in which this differed from the debut was that the 'hardcore' elements, the cleaner gang shout vocals used in tunes like "Crowning the Abomination", took on a more prominent role, but never to the music's benefit. The Surreption has more of an asphalt street mentality that its predecessor, and that manifests not only through this element but the structure of several breakdowns and also the sort of strange division in the song titles and lyrics, which seem pretty evenly distributed between brutal death tropes ("Manifesting Obscenity", "Crowning the Abomination") and stuff which seems more straight up hardcore... ("Decline", "The Consequence", "Kingmaker", etc). Whether or not this was a conscious decision or the band just didn't deign to concern itself with how its aesthetics were discerned at large, it's definitely a little strange and I did feel like this record felt more like a mild identity crisis than countrymen like Dyscarnate who might cultivate a cleaner appearance than the standard cemetery hesher, but are for the most part playing exclusively within the Floridian death metal wheelhouse of inspiration.

There are still a number of moments framed within this album that give me exactly the same sort of fist-balling, pummeling thrill as I found on Surpassing the Boundaries of Human Suffering, and yet as a whole this album felt largely inconsistent, with any decent tune separated from its qualitative peers. A lot of the faster, tremolo picked riffing patterns are lifted directly from your usual sources like a Cannibal Corpse or Suffocation, and even when they get something going they often throw in those gang shouts which completely took me out of the carnage. Don't get me wrong, I'm not opposed to that sort of vocal approach in a lot of classic hardcore, even some thrash metal songs, possibly even outside the normal sphere of where it belongs, but I just didn't feel like in these particular tracks, the tactic was really adding as much of an eclectic departure as Ingested might have hoped. A few other distractions like the predictable squealing breaks ("The Digusting Revelation") often felt like they were just sort of incorporating the death metal playbook rather than improving on it or writing their own combinations. And many of the rhythm guitars just feel like the first thing someone lacking inspiration would mete out when first lifting an instrument...

Production is still crystal clear here, with an appreciable processed crunch to the guitars and a lot of volume to the vocals. Some of the drums sound fairly mechanized due to the mix, especially the tom tones, but this is par for the course when we're talking about most modern death metal so I don't think that would detract from younger listeners or fresher ears who aren't overburdened with nostalgia for 'the way it used to be' to the point that they'd challenge the decent level of skill and energy here in the performance. All told, though, The Surreption never hits that almost hypnotic, battering stride that the debut did on 4-5 of the tracks of its run time. I won't argue that there is more variation to this, but that variation does not translate into quality and the few bits where they adhere to what made the prior disc a solid, forceful experience are mundane by comparison. Lyrics are also pretty obvious and bland in most cases, fiery but vague and cliche.