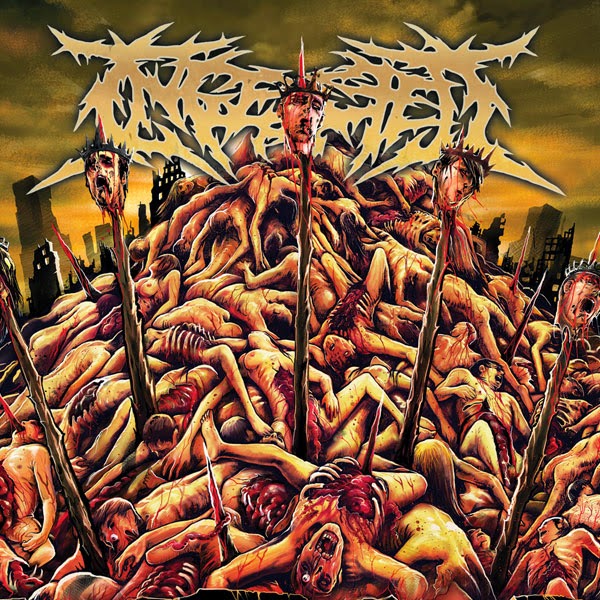 Ingested could have just as easily taken what they did with The Surreption and made the sound even further 'core-based, possibly to a broader level of success since I know there's a fairly prominent scene in the UK for that stuff, and yet...the Revered by No One, Feared by All EP seems like a reverse directional back towards the persistent brutality of their debut album, and probably even a little further. Sure, there are some pretty banal slam/groove sequences on this recording, but the proficiency and excitement levels on the purely death metal frenzies littered throughout these four cuts are infectious, and it really feels like the proper successor to the 2009 album and like The Surreption was a mildly deviant distraction.

This is meaty, chugging insanity which seamlessly shifts between its grooves, heavily laden with big double bass jackhammer force; and these instant flights of blasted death metal with more clinically constructed tremolo note patterns which are, if still not quite unique, at least a lot more effective than similar progressions on the sophomore disc. Though the production on the rhythm guitar still has that clean, crunchy, visceral effect, this album somehow seems darker and deeper and there were places in which the churning brought back memories of a lot of treasured, influential death metal of the late 80s and early 90s (Pestilence and Suffocation both represented, among others). The vocals are still the standard array of snarls and growls, but they feel far more bloodthirsty and they make you want to flip your shit and introduce all those people mocking you behind your back to your butcher knife. Or something psychotic in that ballpark, at least, which is really how I want an album upon which a large heap of naked impaled corpses to sound...I don't know about you, but I'm...just...sayin'.

All four songs are pretty evenly balanced when it comes to punishment, with the first "Titanomachy" likely my favorite, but it all holds up, and at around 15 minutes there's not much possibility to get bored. Some will likely brand this as deathcore due to the structure of the breakdowns, the vocal variation and general image of the band, but I think once we've started to go too far down that road we'll have to retroactively brand a lot of the shit that came out in the 90s and 00s since the dynamics and riff composition is almost exactly the same. In the end, even if it's not perfect, I thought this was really a solid bounce back from the slumping Surreption and the guys should be proud that they managed to lay on the suffering to a degree many fans of Surpassing would find admirable.