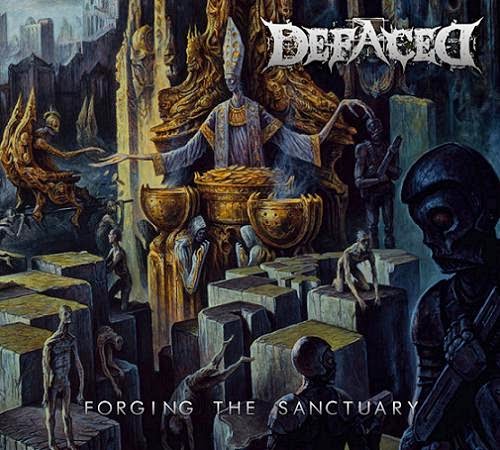 With an acquisition by Rising Nemesis Records out of Germany, Switzerland's Defaced have managed to carve out a stronger showing from themselves through their sophomore Forging the Sanctuary. Stylistically, it would be a stretch to call this a departure from the very average stockpile of inspiration its predecessor On the Frontline was supplied from, but they've fleshed out their individual riffing components enough that I had a better time in listening, and they overall come across as being a little more bloodthirsty, brutal, vicious, and capable of leaving an impact wherever they launch their artillery shells. We're not talking top flight death metal here which is likely to gather a lot of momentum in the heavily saturated scene in Europe where retro-death seems to reign supreme, but it's an improvement, and that's the first step towards anything...

Still a lot of standard blasting mechanics here, with an interchange between growls and higher scraping rasps circa the legends of Carcass, albeit with nowhere near as much carnal character (not even as much as Deicide, who would spit them out in conjunction to create their signature sound). One new thing I noticed was that in a tune like "Sower of Discord" or "Antithesis", they've incorporated a slight black metal approach with some of the dissonance chords they affix to the blasting segments, and these even extend further into some of the airier, atmospheric sequences (as in the same track). Note for note, I felt that there was just a lot more variety to what the band from the weirder pauses in the action that they include in "Rapture Through Bondage" and "Forging the Sanctuary" itself. The leads are far better designed than On the Frontline, to the point that some of them are even compelling, and the other melodic touches offer a little balance to the robust butchery they tend towards.

The death/thrash breakdowns are more explosive and exciting, and though the production of the guitars isn't much different than the first album, it just feels more incendiary and razor-sharp, capable of bleeding more from the listener's attention span. I also have to give props for the Dan Seagrave cover artwork, a good choice and a striking image that is one of the better he has created in years, with that elongated papal figure on its throne of gold and wretchedness. Granted, like so many death metal albums, the image is evocative and exotic and then the music is far less inventive or capable of manifesting aural escapism with the audience, but then Defaced doesn't really have the convenience of doing 'a new thing' like a lot of the bands were doing in the late 80s or 90s. As it stands, though, Forging the Sanctuary is superior to its predecessor in categories, and marks a young band making its ascent...how far is anyone's guess, but if they can continue to extricate more interesting melodies or atmospheric breaks from the banal punishment of their roots, they'll be on to something.