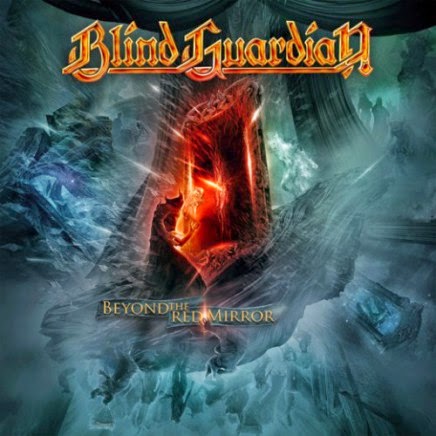 Beyond the Red Mirror is one of those albums of which the first track is not necessarily representative of the work as a whole. This has never been a band alien to the concept of orchestration or other mild experimentation on their classic power/speed metal formula, but even as someone open to such practices, I was a little thrown off when I heard the first tune. "The Ninth Wave", a bloated piece led off by choirs affixed with electronic percussion and more vocal arrangements bouncing to and fro than some weird Gospel setup accompanying a shitty rap act at a Superbowl halftime show, I was immediately inundated with 'future sickness'. Did the beloved Blind Guardian finally jump its shark and record a concept album about Buck Rogers in the Disco Century? Or did they succumb to the bland 'go big or go home' fever that they partially helped invent, which has infected all manner of hack European Gothic/power metal hybrids with female vocalists and lavish stage productions with all the substance of Disney's Frozen?

I find the first few minutes of this record slightly obnoxious, if only because they seem to have put all this effort into layering these disparate elements into a unified whole but along the way forgot to make it catchy. Thankfully, as soon as the digital dust clears, and the band remember that they can sound like they're scoring a large budget German computer RPG by just being themselves and not TRYING to sound that way, Beyond the Red Mirror is actually a pretty damned solid outing which embodies much of what the band represented over the last 25 years, albeit with that slightly more fulfilling stereo production which supplants a little of that processed, heavily layered tone which they have been gradually distancing themselves from since that 1992-2002 creative pinnacle. Don't get me wrong, Olbrich's rhythm guitars still pop a lot here, and he's not bringing many new tricks to the kennel, but everything about this album sounds much 'richer' than the last few, immersive and fully modernized to the detriment of only those fans who wish they still sounded like Follow the Blind or Somewhere Far Beyond...only, they kind of do. Behind the sweltering studio facade, the Germans still beat with the dorky power metal heart that has pumped from the start, with a substantial selection of those flighty, simmering speed metal licks that put them on the map.

Apart from the intro, the orchestral arrangements through the album actually do it justice. Strings and other instrumentation used to great effect in "At the Edge of the Time", which evolves into a pure triumph that wouldn't have felt out of place on Nightfall in Middle-Earth or A Night at the Opera, only with far more bombastic horns leading the charge of the palm muted, constantly shifting rhythm guitar patterns; not the fastest Blind Guardian material, but quite complex in how they structured that all out, constantly attempting to one-up their inspirations Queen if not quite succeeding when it comes to the raw ability to deliver an unforgettable melody or chorus. "The Throne" is another great implementation, which almost has a spy-like aesthetic that felt like they were writing some metal for a future installment of the James Bond franchise. "Miracle Machine", a non-metal tune, is probably the closest they come to Queen or Journey with all those pianos and vocal arrangements, but I don't find it essential whatsoever (would have been a better bonus track/B-side). That said, the entire album has this enormous, worldly sense of momentum which is felt in both the neoclassical harmonies gleaming from within the meaty, punching rhythms and the occasional flare for a more exotic, Eastern note progression. Hansi is as always the central focus of the band, but while he delivers as always, it's Olbrich and Siepen who seem to be having the best time, and it's their frolicking little nuances in tracks like "Sacred Mind" that make, rather than break, the album.

I would like a Blind Guardian record with better bass guitars. Most of Barend Courbois' lines (on loan from Vengeance) are scantly noticeable, and this is a region in which the band has long suffered from a deficit that would better support all those booming symphonic swells, eclectic riffs and leads. I notice the instrument is there once in awhile, but it becomes too easy to forget about amidst the constant piling on of dramatic orchestration and Hansi reaching for the vaulted ceilings of whatever cathedral he imagines himself singing in when he records one of these things. Frederik Ehmke, on the other hand, manages all of the band's vivid eccentricities with firm planning, loads of potent fills and a lot of attention paid across his entire kit. The choirs, strings and other instruments thrown in here all sound high end, though they don't always consistently add much beyond breadth to the riffing. It's a vast, airy, state of the art record, which is going to titillate the modern metal audience while further alienating those who covet their copies of Tales from a Twilight World and cringe at change, which let's face it, already happened a very long time ago once the band decided to put out a concept album about The Silmarillion.

I flounder about in both camps, really, but considering this band even wrote a song about Peter Pan that could find emotional resonance with me, I have no aversion to the scope of what they were trying to accomplish here. With the caveat that the intro and "Miracle Machine" are things I could very easily skip, I find that the guitar work and the song arrangements here are marginally better than the last full-length. Is it on par with that decade of excellence now removed by another 13 years? Not on your life, but it's aspiring, dramatic. Far more functional than it isn't. Pompous. Elegant. As goofy as ever. Still Blind Guardian, still plucking at the heartstrings of men. Halflings. And elves. And that hot chick at the LARP. You know the one.