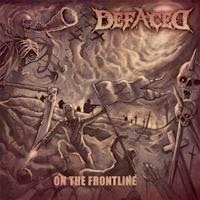 The Swiss death metal scene arguably peaked with its most antiquated acts, some of whom were not exclusively death metal and have sowed their influence far and wide across numerous genres. But gone are the days of Hellhammer, Messiah, Coroner, and Celtic Frost, and since that time there seems to be a slight preference for black metal in the reason. Sure, a handful of brutal death metal bands have been signed up from the region, but few exhibit the sort of cultural distinction that most other European countries provide, and judging by what I hear on this first album by Defaced, that pattern is in no jeopardy of disruption.

To be fair, these guys (not to be confused with The Defaced of Sweden who performed a more groove/thrash metal style) draw upon some older influences than most arpeggio freaks and tech wankers eschew for their Suffocation/Necrophagist-born songwriting chops. I was hearing quite a lot of British death/grind influence, particularly the battering force of Napalm Death and the sort of everyman growling and presence of 90s Benediction, with some of the brickwork no-frills applied punishment of Danish veterans Panzerchrist or Dutchmen Houwitser. Very precise blast work balanced off against slower, Morbid Angel-chugging miasma with double bass. Cookie monster gutturals delivered against the snarling contrast of death and grind pioneers. A rich, churning guitar tone which doesn't ascribe to the Swedening and gives the album a production value well beyond your average unsigned act.

They vary up their pretty standard tremolo-picked phrases/blast progressions with a couple of leaden grooves circa Sepultura's style (without going anywhere near nu-land), but often lay into a pure grinding headache, or some slower death/thrash patterns that feel like meatier Slayer chugs. Not averse to leads, they often rely on bluesier basics gone wild than anything more caustic, atmospheric and unnerving which a lot of their influences thrived on. And this all sort of contributed to a mere lukewarm reaction I had to the tunes here. Once in a while you've got a tune like "Departure to Hell" where they focus on a few peppier death/thrash riffs which lean more towards the melodic death structures of mid-era At the Gates, or some truly punctual palm-muted breaks of a Fear Factory caliber, but as you can sort of tell reading through this, the band just never develops a distinct style of their own, molded strictly upon the trodden grounds of their forebears without making it feeling fresh, vibrant or even really nostalgic.

There are other bands like Coldworker that have done a better job of integrating all these old school pummeling death and grind inspirations into better riff fixtures, where On the Frontline simply seems substandard in its construction. By no means is it a bad album, and the members apply themselves to their instruments with concussive integrity, but there are few if any guitar riffs which stand out among the legions here and even the song titles feel a little blase and unoriginal. I mean..."Pleasure to Kill"? I'm not saying old bands have some inviolable right to the use of these words, but do a little homework at least. You probably don't want to name tunes after verified classics, especially when they don't even have a shadow of a prayer of living up to them.