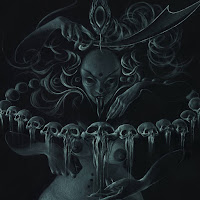 Decadanse is an interesting album for me to approach, for while I've heard a few of this artist's myriad projects in the past (Yhdarl, Silver Knife and Wolvennest to name but a few), he's been on a massive productivity streak with this 'solo' act...dozens of full-lengths and collaborations in just the last 4-5 years, part of which was possibly spurred on by pandemic-era isolation, but is showing no signs of slowing down even today. From what I've just briefly been able to read, the Déhà project is one that intentionally avoids pigeon-holing itself into too narrow a niche, but if I had to describe this, it's almost a horror landscape terraformed through a mixture of drone, doom, black metal, industrial and electronic ingredients, programmed drums with extreme vocals ranging from a prolonged rasp or growl to whispery nightmares or soaring mid-range harmonies.

There are but two tracks, each 22-23 minutes in length and obviously narrating a creepy, grandiose concept through musical construction that transforms from careful control to calamity, but always focused on forming oblique and harrowing imagery in the listener's mind. There are times when this is lurching along like the most stolid funeral doom, and others when it intensifies into blasting frenzy and tremolo picked note progressions. The guitars vary from rather predictable trudges and black metal melodies to more spacious, eerie anomalies that are constantly offering up a higher dimension beyond the aggressive substrate of the songwriting. His vocals are splayed out almost like paints of blood and ichor splashed on a canvas, becoming a part of the atmosphere just as often as they're a metallic, percussive focal point. And what's more, there is a tendency to lurch into some unexpected electronic/techno part which is quite fun despite sounding a little less dire and serious than the rest.

I'm not going to claim I was totally bowled over by Decadanse, I mean it delivers what is advertised and successfully transfers the feelings of gloom and fright into the mix, but occasionally it relies on some repetition, or riff patterns that are a bit predictable or repetitive. In the span of 20+ minutes, there could certainly be a few more interesting riffs or atmospheres on exhibit, I don't know if they struck often enough through this particular album's play-length as they might have on some of his others. But having said that, when I pull myself back about a mile from the details, and just appreciate the dark and monolithic atmosphere, the obvious amount of work places in the tortured vocals, and the placement of segues like the electronic parts, or the creepy acoustic break in "I Am the Dead" with the filtered vox, this is definitely an imaginative and involved work that fans of lightless, atmospheric dread will get a lot of, and I'm surely prompted to listen to more of what he's done directly under the Déhà handle.