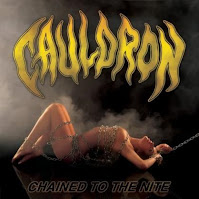 It's got the kind of hot album cover many bands would have dreamed of in the 80s, but then the fact it's coupled up with the cheesy album title font and the gigantic logo is quite hilarious. We have arrived at the Cauldron debut full-length, which dropped on Earache records when the British label suddenly got involved in snapping up a bunch of retro sounding bands to compliment the grindcore and death metal royalty of their back catalog. The style on this one is fully representative of the previous EP, and yet I feel like it does show a little more maturity or restraint (pun intended) that actually sometimes drags it down a little. Really though I think my issues here come a little with the album's mix.

The guitars are just as bulky as they were, but the tone here just stands out a little too much for me, and it feels a fraction too processed, so that it starts to suffocate Jason's excellent vocals, which are absolutely on point here, I just wish I could hear them more against the bulk of the riffs. This is much more egregious on some tracks than other, for instance the opener "Young and Hungry" is one of the main offenders, it's like a young fan plugged in his personal Marshal stack and played over the original recording; and on other cuts like "Conjure the Mess" or the more power-metal oriented "Dreams Die Young", it's not such a big deal, but I honestly don't love the rhythm guitar sound on most of the runtime. The riffs themselves are pretty consistent, and they are definitely merging a lot more USPM and Euro heavy/power into their sound, even a dose of thrashing gallop, which automatically generates a more appreciated variance, a bigger sandbox for the Canadians to play around in. I had mentioned that Jason's vocals were awesome, and they throw in a lot of decent backup vocals and such that show this was a central component. The leads and melodies also sound pretty damn good, but again the rhythm guitar can off-set that.

Basically, if Into the Cauldron was your jam, I can't imagine this would disappoint you, and it continues to cultivate the aesthetics the band would continue throughout their career to date, but I think this is clearly the record most deserving of a remix, because the vocals and songwriting do deserve a little better. A couple of the tunes are also better earworms than others, but there is at least always some cool vocal line or riff in each, and though they do experiment with some of those aforementioned metal styles, there is still that core of West Coast heavy metal in plenty of tracks like "Chains Around Heaven" or "Bound to the Stake" if you wanted them to keep rockin' like Dokken. A decent debut that struggles a little under its studio choices.