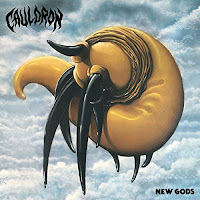 New Gods is by far the best-produced of the Cauldron albums, and I can only imagine if most of the prior full-lengths had been given the same treatment. Bright, clear and powerful enough to carry the strength of the rhythm guitars and Jason's vocals, any of the small and annoying flaws of the past are history, and this is the new standard by which they should record. As with the album before it, In Ruin, this one also sticks to their strengths at writing mid-paced, classic heavy metal with a bit of a punch to it when necessary, and almost a laid-back mood to the writing which gives it an atmosphere it might not otherwise possess if it were firing on all cylinders. Clearly rooted in the mighty 80s, the Canadians seek to smother you with quality hooks and memorable vocals, and while I don't know that I like the songs as much as those on its predecessor, the added richness of the production really goes a long way towards compensating, because even that one was a little too washed out in moments...this suffers nothing of the sort.

The formula is simple: take basic heavy metal chord structures of times past, add the distinct vocals, and profit. Worked well enough for all the hairspray, fishnet stockings and leather skirt-lings of the past, but Cauldron isn't burdened by any such lame fashion sense, they're just cultivating the strengths of accessible, occasionally AOR-worthy metal music that is pleasant on the ear. I admit that the Lovecraftian cover artwork is a bit of a throw-off, but the band has sadly not excelled in this department with the one exception of their 2012 album Tomorrow's Fortune. But the lyrics and music here really don't give you any such horror impression other than the strong associations that heavy metal and hard rock always had with that genre, especially in the 80s when band like this one's heavy influence Dokken were tapped to do. So there is a clear aesthetic mismatch that does the music no service at all, but if we can ignore that, then New Gods is a damn tight album with a timelessness about it that easily thrusts it to the forefront of their catalogue alongside its direct predecessor and the original Into the Cauldron EP.

I mean if we got this album in 1985-1987, this would be one of those 'respectable' sorts of metal records that might see a little rotation on MTV's Headbanger's Ball, mainstream enough for the hair metal crowd but also satisfactory for those into the heavier shit who were just waiting for that potential glimpse of an Armored Saint or King Diamond video at half-past midnight. Similar to a Bonfire or an Accept, maybe. Jason's vocals have never sounded more refined as this, and the guitar tone just smokes every previous Cauldron record. The drums aren't doing anything special, but they also sound great, and tunes like "Never Be Found" and "Letting Go" are among my favorites in their catalogue. They don't include any lame ballads, which you'd think they might flirt with, but they do have the very mainstream sounding "Together as None" which definitely sounds a little bit like a prom song from that glam era, but it has some warm chugging and a good chorus at least, and hell Saxon has done this a number of times (like "Hold On"), and well, so I can forgive it.