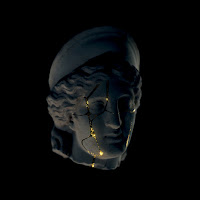 2017's End of Chapter was novel for coming out of Lithuania with a bright, post-black feel, but for me the Au-Dessus full-length debut something short of greatness despite its earnest, impassioned attempt. The band has taken some time to put together its successor, a more concise, 25 minute EP recording which cover only five tracks but covers about the same range of atmospherics and intensity. This is still a band which goes for that wall of force mentality, when they are firing on all cylinders there is not a lot of space left between the riffing volleys for the listener to use his/her imagination. Mend is more about going along for the ride with the roiling riffs, scathing rasped vocals, and the clash of violence and warmth within the surging tides of the songwriting.

The "Negation" duology is the one-two punch that inaugurates this release, first with several minutes of excellent ambiance, then lurching into some steady, textured, dissonant, bright and doomy chords, all to set up the writhing speed of "Negation II". The variation continues a little with "Lethargy", one of the most turbulent tracks with a mixture of snarls and gutturals and some volatile chord patterns broken up with percussive fills and moody ambience created at the top of the guitar chords. Despite the strengths early on, though, I felt like some of the later material like "Epiphany" was its most formidable, with the seismic, dissonant shifting groove patterns that crash into the post-hysterics like irritated waves against a rusted steel beach. There's a bit of sameness sometimes to the riffs, although I do like the textures and chord-forms they play about it, and I wish they could throw a few more left hooks in this area, but I think overall the material here with slightly more satisfying than on End of Chapter, without alienating those who enjoyed what they heard that half-decade ago.

An interesting band lyrically, in how they package their releases with iconic, simple imagery (here as on End of Chapter), but not necessarily the most unique in sound. I rather liked their ambient intro and wish they could have incorporated sections like that, perhaps more directly balanced with the heavy parts, but all told Au-Dessus remains a solid band to check out if you dig a bit of the modern or 'alternative' into your black metal without tossing away the building blocks.