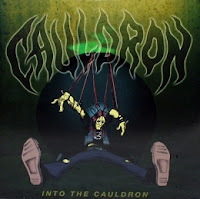 Born from the dying embers of Goat Horn, Cauldron was an act that sought to hone some of those same influences, but dropping off the doom metal for a more pure retro heavy metal sound redolent of, but not entirely relying upon the 80s. I think this was an important maneuver, because while the Canadians might be a little underrated even to this day, and have truthfully been inconsistent with some of the ensuing full-length albums, I think their arrival was one of a number of portents that cravings, both newfound and nostalgic for classic metal sounds were to once again explode across the metalscape, as they tend to do in cycles. It doesn't hurt that their Into the Cauldron EP is a fucking barnstormer that, at least for me, rendered Goat Horn irrelevant within about two tracks, it is just THAT much better...

This is STILL some of their best material to date, with riffing that comes across like a mix of West Coast sounds of the 80s, with the catch that it's heavier and more iron-clad. Maybe combine the first two Armored Saint records with a more aggressive Dokken, and it might turn out like this. The guitars are potent, the bass loud, the leads effective it not entirely catchy, but for me the selling point to the band has always been the vocals of Jason Decay. Down to earth, memorable, melodic and a little acidic, this guy is the epitome of the 'guy next door' heavy metal frontman, and that is what lends his presence such character. Sure you will hear a one-off higher scream or growl, but his voice just brings me back to a bunch of low rent heavy metal records that never got their due, that I'd actually find throughout the 90s in the bargain and cut-out bins on tape and LP, in Boston or at one of the many record dives near my alma mater UMass. A few friends and I would snatch these things up and take them back to our apartment or dorm room and just revel in the cheese, more often than not truly falling in love with what we've heard. Cauldron does that for me, and I thank them profusely, even if I don't like all their albums equally.

Four tunes. Three burners and "Restless", which is a little more measured, but no less powerful once it gets into those plodding triplets that Decay sounds great soaring over, and his lines there definitely expose the roots to some of the great material they'd write for their better albums like In Ruin in 2016. The mix here is really dense and home-grown, with guitars taking the forefront but not in any way clouding out the thundering drums, bass-lines or vocal track. I don't have many criticisms, I could do without some of the snarled vocals but they are so sparse it doesn't matter, the cover art is terrible, and I'm sure a few of these could be catchier than they are, but all told this was a fine introduction to the band that I will still spin alongside some of their stronger full-lengths when I need a dip in the Cauldron.