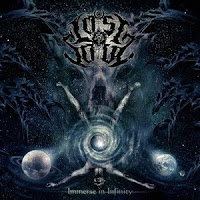 It's been a few years since the crushing Chaostream, an album which proved Lost Soul had the potential to join the very A-list of Polish death metal (Vader, Behemoth, Decapitated, etc.). 4th album Immerse in Infinity arrives, with some new members in tow, and crushes those same floodgates of potential, destroying the previous album and offering 8 tracks of quality death metal with a fine tuned balanced of technical precision, progressive riffing and unrelenting brutality. This is death metal devastation here, the complexity and superb production of the record should vault this band into the radar of many ignorami who have not yet heard of them.

Next to Vader's Necropolis (which is a lot more barebones than this album), it's the best Polish death of the year, easily obliterating the latest Behemoth for that honor. "Revival" opens with a lush cosmic ambience, with a throbbing bass that helps emotionally ascend into a destructive arsenal of storming riffs as the heavens tear asunder. This album is like the Galactus of death metal. Jacek Grecki has a voice very similar to Piotr of Vader, if a little blunter in places. You'll probably want a breather after this first track, but the intimidating "Personal Universe" will not allow such folly, as it bludgeons you into oblivion like a fleet of Star Destroyers en route to a real conflict. "...if the Dead Can Speak" begins with some timid, flowing guitars, elevating with some breakneck chugging, grooves and double bass madness, before the vocals take command over a simple, rolling pattern. "216" then again annihilates the listener into formless space dust. Get used to it, because it's going to happen again with "One Step Too Far", "Divine Project" and the tribally taunting "Simulation".

The album is just fucking sick. It sounds unbelievable, on par with Vader's best, polished works. The cosmic aesthetic is present despite the unforgiving battery of the modern Polish death. To put it simply, Immerse in Infinity is like the interstellar evolution of Immersed in Blood, equally brutal but bathed in a futuristic disposition. Never once does the staggering musical ability of the band interfere with the steady puncture of the songwriting. It's disgustingly humbling and thorough in its hostile statement of intent: if you thought Lost Soul meant business before, they now OWN that business. Enjoy.

Germans must unite and take both back again!

The Germans do have an extremely strong black metal scene, and a growing death metal scene (many bands strong now), so it could happen.

But 'again'? They were never in charge of anything but power metal :) (80s German thrash was mighty, but still ruled by Americans Slayer/Metallica/Megadeth/Anthrax/etc.)

Yea, that came out wrong. I wanted to say 'strike out and take over both', but don't know what I was thinking.