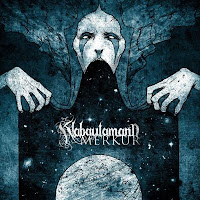 One of Germany's best kept black metal 'secrets', Klabautamann have already released some impressive albums in Our Journey Through the Woods and Der Ort. This third release Merkur is not exactly a repetition of either of those works, it is a progressive and complete transformation into a staggering musical entity. Perhaps the most apt comparison would be to last year's Vertebrae from Enslaved, an album which embraced both its heathen Viking black metal roots and a Pink Floyd-ish paragidm. But Merkur goes a step outside even this box, for at times Merkur feels as if you are rolling through the hills to some forgotten prog rock album of the 70s, until the snarls and aggression arrive to show you the band has not forgotten what led them here.

I should have mentioned up front that Merkur is what I consider a masterpiece. It's a work of brilliant composition that I find both bewildering and intimidating. I'd like to live in these minds for a time and witness the creation process. "Unter Bäumen" opens with some speed picking beneath Tim Steffens slathering black rasp, with various tonal shifts to create a momentum like that of a longship driving towards the shore. The track soon elipses into a period of flowing folk which captivates like ancestral ghosts flowing through a forlorn summer sky. "When I Long for Life" has a desperate, grasping feel to its glorious tumult, the drums lumber along below the solemn riffing, before the track ascends like the scaling of a mountain, eagles soaring and rasping across the channel of human ambition. "Stygian" begins with subtle, tempting guitars and shifting percussion, Steffens' whispers drift across the soul haunted waters of the song's mythic namesake.

The red streams flow everywhere
A grey curtain and rain everywhere
Bury me inside the fields, where grass grows tall
I will be gone with the morning fog
Come wrath, cover me sweetly

"Herbsthauch" picks upon the gnarled skin like a cloud of voracious flies, a twisting nightmare that thankfully ellipses into some fatal acoustic plucking. "Morn of Solace" is graceful and panoramic, another track reminding me of Enslaved's recent work. "Der Wald Ist Ein Meer" balances a playful melody with a bleak, grooving bridge. The title track is chaos incarnate, like a circus of demented clowns you bricked up in an old castle, leering at you from behind its walls. And if you're not yet convinced of this band's forward and reverse thinking style, the wanderlust of "Lurker in the Moonlight" and the steady tranquility of "Noatun" should quell your doubts.

Merkur feels vibrant and alive, yet so dead, like the breath of ages returning to a hollowed corpse through the whispers of the wind. The album will at times pleasure and haunt you, and truly few emotions are left behind. If there is justice in the vast realm of metal fandom, Klabautamann will soon become a household name. They possess more depth and vision than most bands twice their age, Merkur just fucking destroys. An Opeth for black metal, yet superior in every way. I dare any opponent of metal music as unwashed noise for delinquents to spin Merkur and tell me he or she feels the same way, because at its apex, this is what the art form can produce.

I will have to prioritize this.

Album art of the year?