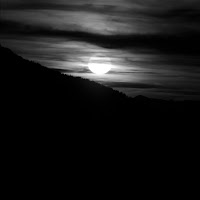 Lustre is one of several projects from the Swedish musician Nachtzeit, who has played in Hypothermia. After releasing the Serenity EP last year, he has arrived with the project's first full-length. Nacthzeit performs all the instruments on this album, which consists of two 20-minute long tracks.

Night Spirit might have a limited appeal, as the material is extremely slow and repetetive. "Part 1" begins with the same riff it will maintain through almost 20 minutes of playtime...a doomish, simple wall of keyboard and guitar fuzz. Throughout the track, the grim vocals appear and disappear, and additional keyboards arrive to perform a few catchy, developing phrases which simmer in a subtle glory. Give in to the track's sparse charms, and you may feel a soaring sensation for as long as your attention can be held. There are some points which certain guitars cut out and the vocals sneer, or subtle variations at best, but ultimately the track grew wearisome.

"Part 2" is not unlike "Part 1", but the subtle context of the driving, glorious guitars was faster to sink in. In this track, there is a nice sequence where keyboards take over and then slowly progress forward, like a funeral for a mountain. Though I can't call it truly memorable, I found it more enjoyable than the first. The purpose here, is of course, not to 'enjoy' the music but to let its sad, droning endlessness consume your heart for 20 minutes. To that extent, it achieves a moderate level of success.

Night Spirit is decently raw but by no means inaccessible. The chords are simple and powerful, resounding alongside their synthesized companions. The keyboard melodies are graceful enough if you're able to become hypnotized by the composition. Of lyrics, there are few, and predictable. Fans of epic, minimalist ambient black metal (or perhaps funeral doom) might draw some inspiration from an album like this. Think Summoning, only stretched out in length. I didn't find the two tracks here impressive, but there are places where the album delivers an effective backdrop for the hidden sadness of the subconscious.

Verdict: Indifference [6/10] (the sense of beauty from me was taken)

I definitely thought of a doomed-out Summoning when I listened to the samples from this. I think the score is accurate from what I heard, yet I still found the music pleasant and plan to give it some time later.