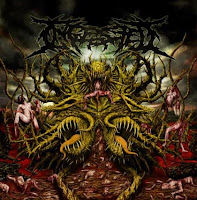 Because it does this well. On the surface, this is no different than a thousand other brutal/slam death metal albums you'll hear, but this young outfit impresses through their ability to craft their mosh pit extremity into cohesive songs that fuse the expected level of guttural violence with some truly crushing old school death rhythms. The riffs are kept simple throughout, but never once extraneous or dull. Most of the complexity comes through the insane battery of drummer Lyn Jeffs, truly a beast. The vocals are your typical pattern of brutal grunts, but they are offset by even deeper gutturals and harsher snarling, and thus kept interesting throughout. The absolute best moments of this album are on tracks like "Intercranial Semen Injection" where they bust out this insanely great, primal death metal riff astride a wall of Jeffs' berserk footwork. The material is consistently strong if you have the stomach for this level of punishment: "Stillborn" sounds like a heap of rotting corpses being fed into a trash compactor, and "Cremated Existence" is like a drunken juggernaut of dumb yet satisfying pit rhythms.

You know, it's about time we had an Earth Crisis reference on this blog.