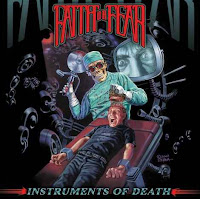 It's been 20 years since the release of Punishment Area, the sole full-length from this New Jersey thrash band, but they are probably best known as 'that opening band' on the Ultimate Revenge 2 tour/videos (also featuring Dark Angel, Death, Raven and Forbidden). Punishment Area was a pretty average release for its day, with one or two hooky tracks and the rest forgettable. With the hype they had behind them from the Ultimate Revenge 2 video, I sort of expected more, but the band disappeared for some time.

Instruments of Death is not really a new album, instead it's a collection of demo and unreleased material. The first four tracks are a re-recording of their 1988 demo Dehumanized (prior to Punishment Area), and the rest of the tracks are from recordings between 1989-1990 that never saw the light of day. Faith or Fear play a slower form of thrash, with meaty and pissed off vocals that have reasonable character (think Nasty Savage, Sacred Reich or Hallow's Eve for comparison). Surprisingly, it's not the new demo on this release that I care for, but some of the unreleased material. Tracks like "Sacrifice" and "Nightmare of a Lifetime" have an old school authenticity, just as good as anything off Punishment Area (save maybe "Lack of Motivation"). The style is pretty much what you'd expect from previous exposure to the band. Lots of mosh-like rhythms to offset the occasional faster riffs, which recall early Prong. "Darker Shades of Death" is also pretty good.

This release is a hard sell for anyone who isn't already a fan of the band's album Punishment Area, but if you actually remember and enjoyed that release, and don't think the style is dated, then you might not kick this out of bed for crackers. The lyrics are pretty weak, akin to many 80s thrash bands who simply didn't hold up, but I've heard worse. The music is decent, and the songs I named above induced some mild headbanging fervor in me, but there is simply so much superior thrash metal. That said, diehards will be happy to hear what the band has been up to in all this time. It might be interesting to hear what they could do with an entirely brand new album.