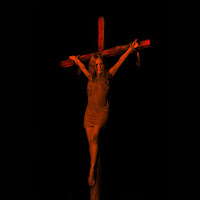 I would have been content if Lucifer could keep putting out equivalents to Lucifer II and III for the rest of my years, but they had to go and do one better, with an album that continues their descent into a slightly darker territory, but still fully within the envelope of sound they had been developing over their first three. 70s cult hard rock and blues swathed in a blanket of doom and modern occult rock, from a band of musicians that simply do not make any wrong choices when they're picking which riff to sear out into the listeners' consciences, or up against Johanna's addictive vocal style. The reliance on simple but often subtly menacing title and lyrics also helps round out the aesthetic, and sure, the band's name might preclude them from the international stardom I think they deserve, but only because so much of humanity are a bunch of fucking squares.

The material here isn't outside the wheelhouse of the previous album, but notice right away that the tones are a bit heavier, some of her vocal effects a little more raw, and they waste no time introducing this to you with "Archangel of Death" or "Wild Hearses", both beautiful and ponderous pieces that slosh around in the bluesy murk until its time to enchant you with a chorus. And then they have to go and unleash my single favorite riff of 2021 with "Crucifix (I Burn for You)"...imagine Slayer wrote that one on an album just after Seasons in the Abyss? This track and "Bring Me His Head" are the 'fun' and arguably most radio rock ready tracks on the album, but by no means is this the end of its depth of riches. "Mausoleum" frights and delights with its funereal organ intro and spacious, almost Moody Blues atmosphere, while "Cold as a Tombstone" creeps along like a proto-metal spider across the covers you hide under at night, and "Phobos" makes for a surging, epic, climax to the whole affair. This definitely feels like Lucifer III with an added layer of grime and muscle to it, the poppy 70s inflections still intact, and still plenty of adventure as they field a number of guitar and bass lines that feel fresh for their catalogue.

It's simply unbelievable how good this is, and I remember getting the album right in the depths of my beloved Halloween season and instantly confused how they could have gotten better yet again! It just seems like such a simple curve that they'd lock it all in and produce their masterpiece within an album or two, and yet with each new record you get a little more weight and depth, songs that resonate even longer than the previous, and yet you can still trace even the extremes of Lucifer IV straight back to the toe-dipping on the first album. To me, that is the mark of a fantastic hard rock or heavy metal band, and Lucifer are easily one of the best to arrive in this past decade. Catchy and yet never cheap or cheesy, thoughtful even when they're clubbing you over the head with one of their harder rocking rhythms, and sometimes as beautiful as the light of the morning star. A delicate terror. May they reign under the tree of forbidden fruit forever.