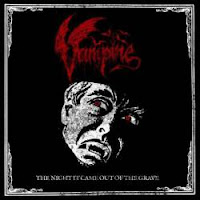 Miasmal and Vampire seem like a natural team up for a split 7". Both are Swedish, both are melodic and aggressive, and both are pretty good, although I'm not sure I'd place the former in quite the same class as the latter. But I certainly dig the Miasmal s/t and their later albums, and the potential for these two on Century Media was immense, and hopefully it still is, but we haven't heard from Miasmal in some years. I admit that I was most interested in this for "The Night It Came Out of the Grave", an exclusive Vampire track which is quite awesome and more in their blackened thrash vein, with heavy overtures of Slayer in the rhythm guitars and a bit more of a wicked rawness than their full-length albums, but mostly within the same wheelhouse and quite a good song, though I can appreciate that they'd cast it out for a collector's item like this one. The lead in particular is awesome, and the cool Hellhammer-groove breakdown at the end.

The Miasmal tune is also somewhat fun, propelled by the band's Entombed d-beat influence and then some riffs that rip forth at a faster, more lethal pacing, but it's not nearly as interesting for me because it does kind of blend in with so many other bands of this variety and doesn't do much to distinguish itself, whereas the other side of the 7" is much more fresh and evil. Still, "Queen of a Poisoned Realm" has some great leads in it and it doesn't wear out its welcome, but I prefer a lot of the tunes on their full-lengths to this one. All told, it's nice that these are exclusive tracks to this release, it has some value for collectors, and any chance to hear another Vampire track is a welcome one, over the last seven years they've grown into one of my favorite Swedish exports.