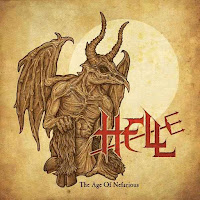 The Age of Nefarious EP is a limited run artifact that arrived around the time that Hell had really hit its heights, folks were stoked to hear the follow-up to the wildly popular 'debut' Human Remains from the reformed NWOBHM legends. It was largely a teaser, with the one title track that would be the first proper metal cut on the sophomore album, and then the rest of the this, the 'B-side', was a trio of live tracks. I'll go into "The Age of Nefarious" itself when I cover the album, but I wanted to cover the rest of this because it's not quite as disposable as one would think. In fact, the only thing limiting the quality of this is its short duration and low availability.

Because these live tunes sound AWESOME. Taken from their 2013 Bloodstock performance, they sound almost as potent as their studio versions, with the caveat that you'll get some of that live noise in between having your head spun off by the great sound. I don't know if Andy Sneap was working some of his studio magic on the live mixing board, or if he just taught someone else well, but the rhythm guitars are punchy and powerful, the perfect force to drive Dave Bower's vocals, which also sound incredible here. I've seen videos of some of their live performances, including possibly this one, and they REALLY pull it off. All three of the selections are taken from the debut, naturally, they didn't wanna give too much away from the new disc, so you're getting "On Earth As It in Hell", "Blasphemy and the Master", and their cover of "The Oppressors". Intense, fun as hell, this all reinforces the idea that Hell was this nuclear explosion of unstoppable, unique heavy/power metal.

If this had been a full length live album I'd be raving about it, but alas it's only a sampling of what might have been, and the studio tune is just a 'single' for Curse & Chapter, a format that I could care less about. But the live songs here are wonderful and I'd highly recommend watching a performance if you can find one on video, it's unlikely you'll be seeing them in person again.