Picture - Every Story Needs Another Picture (1986) 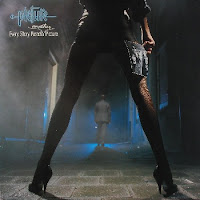 I was hardly any hesher hunk to take advantage of the 80s hair metal sex and fashion, I was too young and dweeby at the time (and the latter does remain an apt description for me now), but something within me always stirs, partly from attraction and partly from laughter, at all these smutty old album covers. She's got a picture...of the band Picture...and she's stalking some private eye dude down the steamy city street in nylons, high heels and leather skirt. And it's on Backdoor records! If you used this as a cover today, I'd still think you were awesome, but there was something so sleazy and entertaining about it back in the day, and I like the color scheme and it strangely sort of mirrors the colors of their better known, more evil looking 1983 album Eternal Dark.

These Dutchmen are best known for that early 80s batch of records, at the crossroads between NWOBHM style heavy metal and more mainstream hard rock, which put them on trajectory for a level of international renown that they sadly didn't ever quite achieve. It's kind of cool to have a couple Picture albums around if you're showing off your old vinyl collection, but even then it's not a group I ever see a lot of people having discussions over. Every Story Needs Another Picture was already the group's sixth album, and it certainly seemed too timid in a year that was producing records like Master of Puppets, Somewhere in Time and Reign in Blood, but listening back on this one now with a fresh appreciation, it was actually a bit more busy and developed than some of their earlier, more straightforward stuff, and it has the sort of authentic 80s atmosphere to it that a lot of bands today fall over themselves trying to emulate. This album effectively sounds as it looks, something you'd chase into the urban nightscape, blaring out of the open windows of your Corvette or Trans Am or whatever was popular to drive in Holland at the time.

The guitars have a heavy foundation of hard rock and blues to them, sometimes using effects as you'd expect from a group like The Dire Straits on their ginormous hit, or ZZ Top, but just as often you've got a traditional feel that reminds me a lot of Whitesnake throughout the 80s. There are some synths here to give it that radio appeal, but also a lot of organs and such which also summon up some Uriah Heep or Deep Purple references. I'd venture that tunes like "Burning for Your Love" even leap off into a mix of mildly prog rock influences with the keyboard lead,s mixed with AOR arena rock for the predictable but functional verse guitar riffs. Vocalist Bert Heerink, who had taken over for Pete Lovell on the previous year's Traitor, has a nice, slicing high pitched voice which is smooth at encompassing all the melodies required over this material. The album does suffer from some softer rock anthems like "Stay With Me" or dull rockers like "She Was Made for Lovin'", but where they get a little more bombastic and intense like the first track "Battle Cruiser" and its cool opening choirs, or "Moving Down the Line", it's quite good stuff..."You Took My Money, You Took My Pride" and "Stand Back for the People in Charge" are also quite fun, the latter even with hints of Boston or Zebra in it.

I just wish there were more ambition here. I think if you like group such as Lion or Dokken, there is a chunk of this album worth your time, and a kernel of their sound was trying to go a little bit further than just the mundane butt-rock that they were undoubtedly pressured towards at the time, because it was either write some giant radio or hair metal hits, or get utterly fucking trampled by the heavier strains of the genre that were hitting in full-force by that time. Every Story Needs Another Picture does not accomplish either of those ends, but as an artifact of the 80s it's not bad if you have a soft nostalgia for AOR or lighter metal that really treads the line.