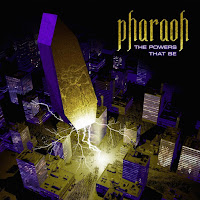 Upon first hearing Pharaoh's latest opus this summer, I remember thinking that based on its riffing strength alone, it was one of the strongest releases of the year, and after several more months I hold to that perspective. As with the Pennsylvanians' progressive power masterpiece Be Gone in 2008, arguably one of my favorite melodic metal records to ever hail from the States, this is not and has never been an act that rested on any of its genre's laurels. There is no predicting what riff is going to follow the next, this is one of the few groups of its kind that feels as if its treading new ground rather than attempting to emulate Dream Theater, or the flowery, trite Euro power anthems, or the sort of generic screeching throwbacks you'll hear in KK Downing's new band. The ground level is not nostalgia, but innovation.

Sure, internally there are similarities in production and riff patterns across this band's own discography, it's Matt Johnsen's sandbox after all, but even there you can tell they're pulling out all the stops to create new progressions. This is arguably the band's most technical outing, with a gajillion melodic riffs hitting you in each track, the vast majority of which are well-structured and would be impressive even if you turned the rest of the band off in the mix...only you'll never want to do that, because Chris Black's drumming is just intense across this thing, fills all over yet complementing the rhythm guitars, and Chris Kerns' bass-lines are also formidable, and really lock down that lower end so Johnsen's playing can just shimmer all over the place. The leads are tasteful, occasionally flirting with a shredding velocity but never beyond the point where they complement the rest of the instrumentation. There are some cleaner guitars, as used in the folksy "Waiting to Drown" or the intro to "When the World Was Mine", but these didn't quite excite me as much as the electrics, although they do function alongside the moodier vocal style Aymar uses in the former.

Speaking of which, Tim's voice didn't quite score with me the first few listens through this one, for some reason I thought he'd lost a little steam from Be Gone or Bury the Light, but now going back through it I realize I was just being foolish, he sounds perfectly fine and continues to possess one of the more unique voices in USPM, or really metal at large. He's like a David Wayne, an Udo or a Flemming Rasmussen (on the earlier Artillery records); he's just got this burlier, angry edge to his intonations that in no way diminishes their melodic impact. You can just instantly place the voice once you hear it. All of this is captured in a super clean mix which isn't terribly different than the last two albums, but allows all of the players some distinction from one another without feeling insanely polished and neutered. To some degree this feels like Be Gone: Advanced Class, an album that is nearly as catchy, but even more proficient, and while it might not just have instantly ingrained itself into my ears, it's extremely rewarding, highly re-listenable and propels Pharaoh even further into a class of its own.

Posted by autothrall at 7:14 PM