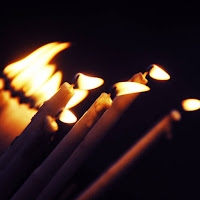 Melissa Moore is best known for her work in more extreme metal acts like Absu (as Vis Crom) Rumpelstiltskin Grind and XXX Maniak, and in particular I really enjoyed her writing and playing on the 2011 album Abzu. But if I'm being quite honest, and if these two tracks are a reliable measuring stick, I think she's found her calling with this retro heavy metal act Sonja, which has only produced this single to date, but goddamn is this excellent material. It's the sort of riffy, memorable and exciting heavy metal which is, yes, largely a throwback to the 80s style, but like some of the better bands doing that today, also feels like it is actually taking that style forward into the future rather than relying entirely on aesthetics of the past. The two tracks here are so well done that I've been slavering for a full-length ever since...

The vocals are excellent, higher pitched without being screamy, and echoing with resonance in both the studio and emotional departments. I guess a good comparison would be Canada's Cauldron, in how she uses sustain and notation, but she's just a fraction or two higher. There also hooks for days going on in these cuts, especially "Nylon Nights", and I love that springy, organic tone she uses, which is one thing that absolutely sets this apart from a lot of the more direct 80s imitator bands. When she's just diving into those guitars in the bridges it feels so fresh and adventurous even if technically it's not novel. It's almost like High Spirits if you really ramped up the memorable and pounding on the guitar. And it doesn't hurt that she's got Grzesiek 'Gunslut' Czapla of Woe laying down the beats, and ex-Tombs bassist Ben Brand with some bass lines that anchor the tone of those vocals and guitars perfectly. Fantastic stuff that fans of Haunt, Traveler, Night Demon, Pounder, Enforcer, Spell and the bands I already named should track down this instant. If they'd put out an entire full-length of this quality in 2018 it might have made my AOTY.

Posted by autothrall at 1:03 PM