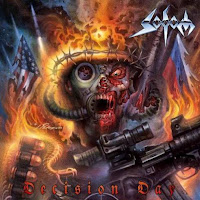 Every year, it seems like some old band I've been listening to for decades gets a chance to shine again, and a case could really be made in 2016 that it was Sodom's turn at bat. I can't act like I'm too surprised, since I'd already been teased a few of these tracks for some time now, but this must easily be my favorite of their albums since 1990. That's not to say I've despised all their intervening material; records like Tapping the Vein, Code Red and the 2006 self-titled effort all have their share of moments. But the last couple studio full-lengths leading up to this one, while polished and well rounded, were both a little underwhelming on impact. Decision Day strives for a similar appeal, in which the band draws upon various epochs of their career to blend together a mighty thrashing epic, but it does so through a nastier discourse that at many points feels genuinely fiery and malicious, not to mention memorable and destructive.

Nothing new, just really well-done Sodom. Having already extolled the virtues of the tunes "Sacred Warpath" and "In Retribution" from reviews of their respective EPs, I'm satisfied that all the other material here feels flush and fluid with them. Decision Day inhabits a realm of variation that doesn't neglect the black, raspy vocals of Angelripper's youth, the heavily structured thrashing rhythms of their classics Agent Orange and Persecution Mania, or even the more arguably accessible and/or melodic anthems they've been churning forth on 21st century recordings. No idea is really off the table if it plugs into a track, so the bombastic, roiling rhythm guitars of "Rolling Thunder" can be measured against the acoustics and Tom's whispers, or the lethal speed which is fundamental to so much of the material here can be laced with slightly more tech/thrash riffs or mid-paced neck breakers while spurious leads spit out across the vitriol of a "Caligula". That same track shows the band's willingness to impose manly backing chants to contrast with Tom's acidic inflection, and they also use a lot of morose sounding moody note progressions that aren't unlike their German kin in Kreator.

The drums and bass on this thing thunder all the way, the former given one of the fattest and most distorted powerhouse tones in all their discography, yet it's extremely well balanced against the far more elaborate and intricate guitar patterns. The latter is almost overbearing at points, but will give Sodom the satisfying extremity that can not only flex off against other thrash pundits of today but also the harder hitting genres which were partly birthed from their very own sound. The album also runs pretty deep. It occasionally suffers from some predictable riffing patterns, but then will almost always come back at you with something catchier that you don't expect, and the excitement doesn't really let up, with scorchers like "Vaginal Born Evil" and "Blood Lions" keeping your attention well in check. It might not achieve the perfection of The Antichrist in terms of how every song just sticks with you, but the chops here are substantial, each track pretty much packed. Vicious, predatory and cautionary lyrics top it all off, and it's really one of the best records released by a veteran metal act this year and regenerates a little of the faith and excitement that has so long languished between me and this once and again mighty band. Better than the last records from their 'Big Four of Teutonic Thrash' neighbors, and overall a lot of punishing fun without lacking in musicality.