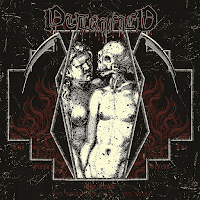 It's always welcome to hear a Swedish death metal band that does not necessarily conform to the prevalent trends of that country, which is of course the endless recycling of ideas set forth by the luminaries Entombed and Dismember to the point that they've become tiresome when not written and performed exquisitely. Now, to be fair, that DOES still happen from time to time, but I've long been more interested in the groups like Repugnant, Necrovation, Corrosive Carcass or Bastard Priest who marry some of those predictable aesthetics to something other than the pure tone-driven schematics so many of the 4th and 5th generation impersonators live and die on. Putrified, a younger band with a couple demos and EPs under their belt, does at least fall into this camp, even if the material on The Flesh. The Scythe. The Tomb. isn't exactly super catchy or mind blowing.

They do rely on some familiar tropes like a couple thrusting D-beat rhythms, but even there they do so more from the hardcore/punk side than the death metal of their peers. Vocally I am reminded of the legendary Martin van Drunen, with a caustic and grotesque growl that feels like the singer's entrails are being unraveled while he is recording, albeit not quite so bloody or memorable. Guitars are dirty but they don't employ the same precise HM-2 tone you've become too overly accustomed to. That said, they're not beyond mixing things up, as they do with their B-side acoustic segues dubbed the "Maleficium" duo. The drums are tinny and intense, and the band also employs a little more of a forceful melodic bent that, when combined with the raving vocals and raw speed, verges on a more intense black or war metal aesthetic which also adds some much needed variation. It's all cast in the gloom of that ages old sort of primal production value which will inevitable render it timeless, not because all the songs are amazing but just because it feels so pure.

Second half of the EP, minus those mentioned instrumentals, is devoted to a pair of covers, and while I can give or take the abusive version of the Misfits' "Devil's Whorehouse", which has been ramped up in intensity, the rendition of Celtic Frost's "Morbid Tales" is a real treat, supplanting some of the more leaden groove dimensions of the original with pure black/death metal bursts that make the breakdown just as sick as ever, and the echoed vocals and edge-of-perception organ ambiance do a lot to help transform this into something which feels more in line with the Putrified originals. Not to put down their own tunes earlier on the recording, but this was actually my favorite part of the recording. That said, while this collection of tracks overall didn't completely sate me, I definitely did enjoy the style and the production they used here, so when time comes for a full-length I'm likely to check it out and hope that it persists with this sort of blasphemous, energetic, but cavernous atmosphere.