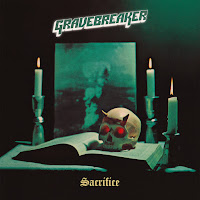 Nobody's going to accuse any of these retro 80s heavy metal acts of originality, but in all fairness it's not like that's a virtue for most of the more 'modern' strains of the genre either. We listen to a lot of these bands to hear how they've spliced the DNA of precursors into a mildly distinguishable format, and after a time writing and putting the material to disc, a sense of self-identity tends to emerge which is the classic coming of age tale. That Sweden's Gravebreaker have instantly, upon their debut album, managed to capture both my imagination and nostalgia, through a very strict adherence to early metal aesthetics in both composition and production, speaks well of where they're at and where they're going, even if it's become even more commonplace to experience throwback sounds like this.

One of the obvious comparisons is going to be made to Running Wild, specifically the gravelly and grating mid-range vocal of Nightmare, who sounds a lot like Rolf Kasparek in his earlier years, albeit a bit more nasally. Some of the riffing also summons up Gates to Purgatory or Branded and Exiled, that simple, fuzzy bite to the rhythm guitar which instantly gives Sacrifice a dated appeal, especially in stuff like the title track. But in terms of how the riffs are actually structured, I heard a lot of other paeans to classic obscure German and Swedish heavy and speed metal circa Stormwitch, Warrant, Samain, Proud, and Heavy Load, not to mention a few threads of USPM like the early Omen material, not to mention the more prominent influence of bands like Judas Priest and Saxon in the chord array. Leads are efficiently constructed but don't take too much of the attention away from the meat of the songs, and the bass here has a slightly more throbbing and active role than a lot of alike bands who simply bob along the root notes and never stick their neck out for fear of getting them cut.

What's more, Gravebreaker make an excellent use of synthesizers throughout the album to give it a hazy, late night horror mystique that really rounded out the workmanlike riffs and attitude. Whether it's the creepy closure of "Sacrifice" itself, with a melody that plays alongside the mute picking of the rhythm guitar not unlike something you'd have heard on King Diamond's Fatal Portrait, or the moody keys that inaugurate "At the Gates of Hell" as if it were some spiritual successor to Ozzy's legendary "Mr. Crowley", their implementation is pretty much perfectly fit to offer some contrast and atmosphere to the raw delivery of the metal itself, as are the minimal samples used like the subtle sirens in "Violent City", or the great dialogue from the 1981 martial arts cheese-fest Kill and Kill Again which is used to christen the song of the same name. Add to this a popping drum mix and you've got an excellent vehicle for the nostalgia I always experience for a lot of records of my youth, but the Swedes don't rely solely on that factor, because they're actually writing tunes that are catchy and fun regardless of the decade in which you're exposed to them...

Assuming, of course, that you like the filthy underground underbelly of the genre, a blend of the rugged and anthemic, and the dingy evil cover photography which seems to imply some satanic ritual is used for nuclear purposes. Sacrifice hits a sweet spot between Gates of Purgatory, Executioner's Song, Fatal Portrait, and other records of that '84-86 era, cult film worship, leather and spikes and all things that weren't nice. In a year paving memory lane with the likes of excellent output from Spell, Cauldron, Eternal Champion, Angel Sword and Lethal Steel, this is well worth chasing down.