Master of Cruelty - Archaic Visions of the Underworld (2016) 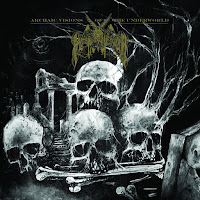 If any continent could be said to be the 'hotbed' for blackened thrash and death metal, South America would certainly be at the top of the qualifiers; not because I count many such acts from the area to be positively top flight, but because they have such a long and storied history with this mishmash of genres dating back to bands like Sarcofago or the earlier Sepultura recordings. It's a chain that has never really been broken, with all manner of filth-mongering over the 90s and beyond, and today there is arguably the greatest level of saturation for this hybridization we have ever seen, bands almost locked in competition for who can provide the most excessive and dirty DNA-tampering of both their local forebears and the 'first wave' champions from Europe like Venom, Bathory, Sodom, Kreator, Hellhammer, Destruction and Mayhem; liberal doses of Slayer perfunctory.

Master of Cruelty is a fairly well comported virus among this outbreak, because it could be heavily characterized more for its songwriting than extremity, and that's precisely the reason I enjoy this sophomore album. Don't get me wrong, they do 'ugly' very well, both in the layer of grime caked onto the rhythm guitars and the truly abominable growls and rasps being by A.G.V. which are soaked in just the right amount of effects to create an otherworldly, hellish presence that contrasts well with the more straightforward tone of the riffing. In terms of structure, they pen hideous lo-fi death metal rhythms which are then interspersed with thrashing breaks and even a few slower, morbid doom chord progressions. The thrash parts in particular remind you of the seedy and disgusting underbelly of wicked Satanic thrash of the 80s, especially the South American style, but then you've got those evil tremolo picked components and some dissonant, brighter black metal chords as a relish. Drums are raw, bass is pumped loud enough that it matters much more than comparable bands where it gets lost beyond its distortion.

Where it all works best, as in "The Execution", you're getting this devilish and delicious mesh of early Floridian death, South American/Teutonic thrash and proto-black/war metal which is both frenzied and chilling, and they pace it all out over an estimable array of tempo shifts that prevent any sort of repetitious boredom from setting in. There's a cool, haunting intro with clean guitars and creepy chants, and beyond that the riffs are distributed pretty evenly between the different sub-genres which have inspired them. At times the transitions can be fairly clashing and sloppy, but at others that does actually work in the band's favor. I'm not going to promise that many of the riff patterns are themselves memorable, but when plugged into the primacy of the whole they work well enough that you feel like you've just uncovered some gem in a dingy basement record store back in like 1993, oblique and vicious and forever, ever underground.