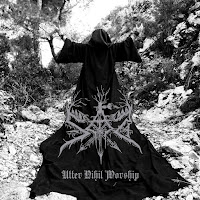 Long and forever a fixture of the Hellenic black metal underground, Sad is a band arguably mired in convention to the extent that there is no possibility of them escaping the shadows of the more eclectic, ritualistic or melodic acts of their region, a fact that I'm sure suits Ungod and Nadir pretty well. The emphasis here has always been on pursuing purist, Scandinavian-rooted raw black metal in the tradition of groups like 90s Darkthrone and Horna, where just about all variation on an album will come strictly through the balance of tempos and the minor production details, but little else in terms of lyrical matter, riff construction or stylistic shifts. They've released some solid fare like 2007's A Curse in Darkness and their album previous to this one, Devouring the Divine, but understandably have not flagrantly publicized themselves or revolutionized their material to the extent that they really stand out.

Their sixth full length, Utter Nihil Worship does nothing to deviate this course. Tremolo picked, dire melodies threaded above hammering chords and harrowed rasps, with a production to the rhythm guitars that is slightly fuzzier and more ear-bleeding than on a handful of earlier recordings. They set up songs structurally so that you won't be constantly bombarded with the exact same riffs and speed patterns that surround them, but that's not to say that when you break down what they're writing on a fundamental level, that it's anything you haven't heard a thousand times before. Truly, only a small selection of the riff patterns here stick to me, like the opening salvo in "Aprophenia", which would have sounded truly evil if joined with some haunting, ancient synth lines as per In the Nightside Eclipse; or the raw and roiling, melancholic tribal war pattern that introduces "War, Father of All", immediately conjured up nostalgia for the fell beauty that even this ugly genre of music can conjure when the mood strikes alongside the toms.

Beyond those few moments, though, there's just not a lot of excitement. Stronger riffs with cede to those that are decidedly less compelling, and the vocals or general atmosphere of the record aren't vile or memorable enough to overcome it's stylistic loyalty, to a fault. There are occasionally a few nice bass-lines, and the production was well suited to the genre, if a little dry, but the riffs just don't offer much of a thrill if you've heard so many similar efforts before. Utter Nihil Worship is by no means a bad album, it's just going to depend on how 'authentic' of a course you want your black metal to stay upon, or if you've grown jaded. But I have no evidence that there is any other objective here, and if you're solely in the mood for what the album promises in its title, then I can't imagine you'd be all too put out. Utter Nihil Worship did not earn my interest, but Sad does continue to earn my respect.